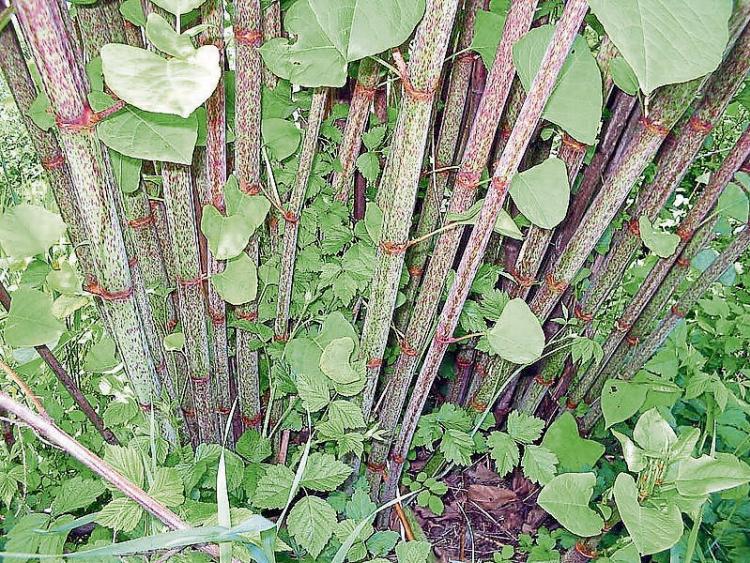 The much anticipated opening of Talbot’s Tower in the centre Kilkenny City has been delayed for an indefinite period due to the re-emergence of an invasive plant that was previously thought to have been eradicated from the site.

Cllr Malcolm Noonan who had been campaigning to have the landscaping and signage works completed to bring the project into public use said he was bitterly disappointed but that there was no other option open to the Council.

Japanese Knotweed is a highly dangerous invasive species introduced into Ireland as an ornamental plant in the 19th century.

“We were aware of it’s presence on the site of the Talbot Tower and had commenced an eradication programme a number of years ago as part of the ongoing development of the project,” Cllr Noonan said.

“When landscaping works were completed by our staff a number of weeks ago, fragments of the plant were found growing from a section of wall and it was cordoned off,” the conservationist added.

“Upon closer inspection and following professional advice, a decision was taking to shut down the site to prevent plant material being taken off site and contaminating other areas.

It has been known to destabilise walls and foundations and damage flood defences when it is found on riverbanks,” he explained.

“Since only the female of the plant is found in Ireland, its spread has been solely caused by movement of contaminated soil or by people taking fragments away on their footwear.

“It is an offence to knowingly spread the plant so we had no option but to regrettably shut down the site until we can have it professionally removed and monitored’ said Cllr Noonan.

The Heritage and Parks sections of Kilkenny County Council are working to have the matter dealt with but that it may take several years before Talbot Tower is open to the public,” he said.

“This has been such an exciting project from its inception and I could see people looking in the railings in recent times wondering when they could get a closer look to this important section of the town’s defences.

“It would have added greatly to the appreciation of other heritage sites in the City and as such it is really u2nfortunate that we won’t see the site open anytime soon. But I hope that people will understand that the presence of knotweed could ultimately undermine the tower itself if allowed to go unchecked so it is vital that we remove it and monitor the site to ensure that it is gone for good.

In the meantime I think it might be worthwhile erecting some interpretational signage on the railings to at least inform visitors of the project and the reason it has been shut down.”

So members of the puiblic denied access to the site for the last number of years will have even longer toi visit the last surviving tower of the old City Walls.