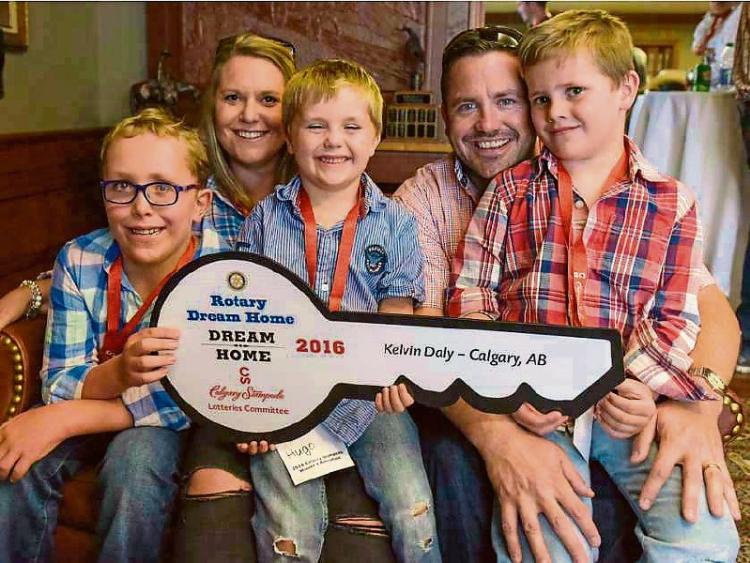 A Kilkenny couple living in Canada have won the local lottery.

When Tina Daly, originally from Bennettsbridge got a call from Stampede Lotteries last week in Calgary, she hung up the phone, thinking the call was a joke or a scam.

“If it was really important, they’d call me back,” Tina, whose maiden name is O’Brien said. And call back they did; it turned out that her husband, Kelvin Daly, originally from John Street, and a brother of Kilkenny auctioneer, Clodagh Daly had won the coveted dream home prize, valued at more than Canadian $900,000.

Kelvin and Tina say they still can’t believe they won: “It’s one of the more memorable days of our lives, we’re still on Cloud 9,” said Kelvin, holding one of his smiling kids in his arms.

“When you buy any lottery ticket, you buy it because it’s a good cause, and the hope is always there that you’ll win something but you never expect it to happen.”a

Kelvin works in the oil and gas industry, and was in Yellowknife when Stampede Lotteries tried and failed to reach him. Then they rang up his wife. She called him via FaceTime, as he didn’t have cellphone service in the area.

“I was doing some work in the office and Tina called and just said, ‘Kelvin, I don’t have time, you need to make this phone call and here’s the number,’ and she hung up, that’s it,” said Kelvin.

“They had asked me not to inform him that he’d won because they had to tell him, so it was a very difficult phone call,” Tina said while laughing. Within minutes, she was live on the phone on local TV, being asked what it was like to win.