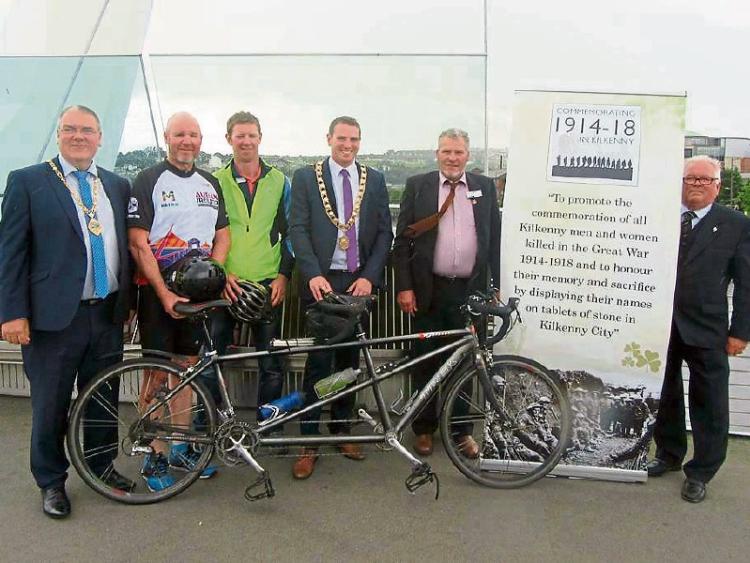 Two weeks, and 2,500km later, Tom Kennedy has been able to finally put the feet up and rest for a bit after his epic adventure along the Wild Atlantic Way.

The fitness enthusiast took just over a fortnight to complete his huge journey — all to raise funds for Kilkenny's World War I memorial. He had been training around 300 350km per week, but to cycle the whole lenght of the coast was no mean feat.

Tom, who is blind, started off in Kinsale on July 9 on his tandem bicycle, supported by a team of volunteerswho each took the pilot seat for a time. He finished on the Peace Bridge in Derry City last weekend, having cycled almost 2,500km from Kinsale in 16 days.

Tom and his friends covered all their own costs, so every penny raised is going directly to the memorial fund. Tom has a keen interest in history and has been involved with the war memorial project. He was recenly in Flanders and has been to the Somme with committee members.

A huge thanks to his helpful pilots Eddie Byrne, Paddy Griffin, Padraig McCluskey, Martina Walsh, Tim Butler — and particularly to Jim Fitzpatrick from Clara, without whom Tom says none of this could have happened.

There is to be over 800 names carved on the new memorial for Kilkenny City, and each letter costs €1.

Thanks to all who donated to the Memorial fund. You can still contribute to the cause or donate toward the cost of a letter on the memorial. Donations can be made online at KK WWI Memorial Fund - Go Fund Me or by contacting the committee on kilkennywarmemorial@gmail.com.

Meanwhile, local Kilkenny great War Memorial Committee are holding a novel, awareness event right in front of the courthouse over the next week. On the plaza will be a replica of a Somme trench on display to until next Sunday, August 14 from 10am to 6pm daily.