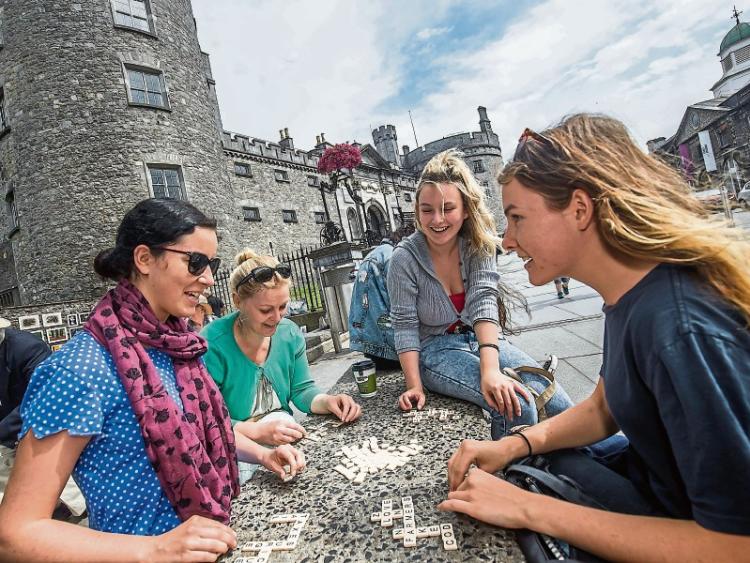 Michael Walsh has a dream of people playing board games around the public realm that is the Parade and the Mayor's Walk in the centre of the city.

It came through on Saturday and is a welcome boost to the city as a whole. You can have your chance to take part next Saturday (more on that later).

“I have long thought that The Parade and Mayor's Walk would be an appealing and appropriate location for this,” Michael Walsh told the Kilkenny People.

“I have imagined couples, old and young, retirees, children, visitors, sitting on those stone benches on The Parade engrossed over a stack of dominoes, or in a game of chess or draughts on a board in front of them. And the Japanese and Americans tourists with their smart phones adding the scene to their souvenir photos,” he added.

“Meet at the Castle Gate at 2 pm on Saturday afternoon, , and we'll find some vacant spots on the stone benches to let the games begin.

“Bring your chess or draughts boards and pieces, your dominoes, or any favourite board game. If you have a small folding table/stool, bring that too, in case there are more of us that can fit on the stone benches. “Spread the word to anyone else you think might be enthusiastic about this idea.

“This is all weather permitting and the forecast looks very promising for Saturday.

It has been hinted that if this takes off the city authorities may consider inserting permanent games-boards into the benches.

Michael Walsh wants to sow the seed of the idea and wants people of the city to help it take root as it has in many other cities all over the world.

“Even if you are not a chess Grandmaster or know only the basic rules of draughts, or seldom have the matching tile in dominoes, or more often slide down the snakes rather than climb the ladders, please join us for a fun launch of an initiative that may become a vibrant and appealing permanent feature of Kilkenny city life,” he said.

“If we give a push to Board Games on The Parade who knows where it will go,” he asked.

So the appeal has been made for people to set up their chess or draughts boards, backgammon or dominoes, (or even snakes and ladders), on the benches on The Parade in Kilkenny this Saturday.