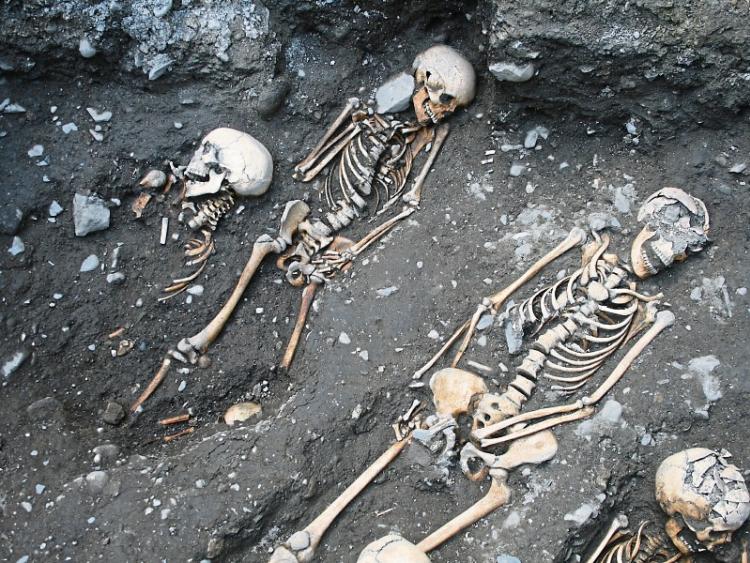 Two further skeletons were discovered underneath the remains of the teenage girl which sparked such interst at St Mary's Church off High Street, Kilkrenny last week.

The latest discoveries are the skeletons of a new-born infant and another young (8-10 year old) girl.

A fracture on the upper left leg of the girl may have led to her death - a major fracture such as this would have been a catastrophic injury in the Middle Ages - but confirmation of this is awaited from the archaeological bone specialist. Like the other four burials that have been investigated, the two new skeletons were buried in simple shrouds - the remains of a pin that held the top of the shroud together was found on the skull of the new-born child.

The skeletons can be dated based on pottery found in their graves to c.1250-1350 AD and their place of burial, in the south-west corner of what was the city's main graveyard around St Mary's parish church, would typically imply they were not wealthy, and instead they were probably the poor of the medieval town. All of the skeletons are female (the sex of the new-born infant is unknown): there were three children (aged between 8-10 years old), an adolescent and an adult aged around 25 plus.

The teenage girl's spine was damaged from the prolonged lifting of heavy weights and one of her legs appeared to be shorter than the other, meaning she would have walked with a pronounced limp. She was probably in domestic service. One of the child skeletons also showed evidence of a severe iron deficiency which was probably caused by malnutrition and starvation.

The human remains were found during archaeological monitoring by Kilkenny Archaeology on behalf of Duggan Brothers contractors and Kilkenny County Council of excavations for a service trench for the new Medieval Mile Museum at St Mary's church, Kilkenny. The skeletons were found at a depth of just 0.35m from the surface and this meant that they had to be archaeologically excavated (with the consent of the National Monuments Service) as the services required a deeper trench. All other options other than exhuming the burials were explored but it was simply not possible to avoid their excavation in the circumstances.

The burials were carefully exposed, recorded and lifted from the ground by archaeologists Philip Kenny, Cóilín Ó Drisceoil, Padraic Crawford and Barry Fitzgibbon and overseen by osteoarchaeologist Dr Linda Lynch. On Friday, all of the burials bar that of the new-born infant (whose remains it was possible to keep intact in the ground) have been carefully exhumed and are en route to the osteoarchaeologist Dr Linda Lynch where further examination of the bones will take place. From her analysis more fascinating insights into the lives and deaths of these early citizens of Kilkenny will undoubtedly emerge. Discussions are ongoing around the future treatment of the burials once they have been analysed and it may be possible to bring them back for burial or display, in an appropriately respectful manner.

Cóilín Ó Drisceoil said the public reaction to the archaeological investigations had been truly remarkable. Thousands of people have visited and been touched by the emerging story of the cold reality of life and death for the poor of medieval Kilkenny.

He was delighted with the interesting questions posed and in particular for the respect people showed to the burials as they emerged from the graveyard soil. “It has been an extraordinary experience for all of us involved in the dig. He thanked Kilkenny Co Council and Duggan Brothers for their co-operation and for facilitating the opening up of the excavations to the public.