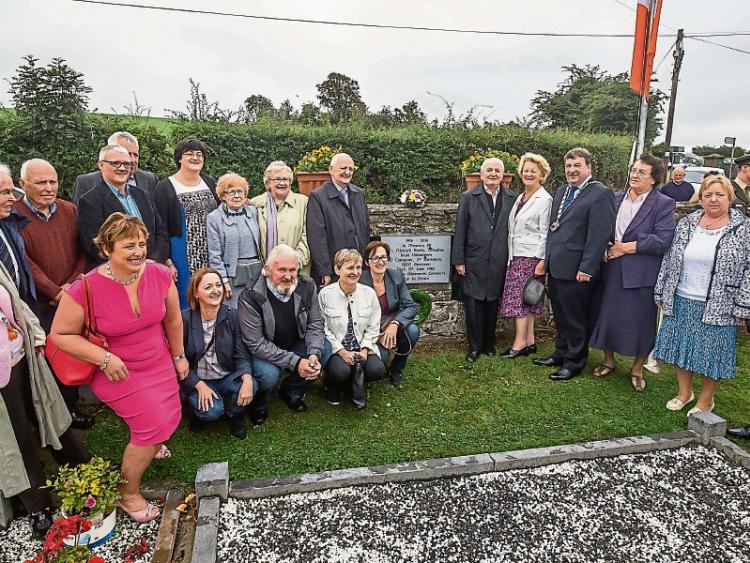 A brave hearted Conahy man was given full military honours for his role in the 1916 Easter Rising at a special commemoration in his native parish on Sunday.

A Colour Party from Stephens Barracks, Kilkenny formed part of the ceremony at a Mass in honour of the late Lt Richard (Dick) Healy at St Colman’s Church, Conahy. Among the Army attendees were local men, Major General Kieran Brennan, Deputy Chief of Staff of the Defence Forces and his brother, Comdt, Canice Brennan. This was followed by the unveiling of a plaque in the adjoining graveyard in memory of Dick who fought in the GPO during the Rising Dick was a member of the Irish Volunteers, D Company, 2nd Battalion of the GPO Garrison.

Quoting from the 1916 Proclamation and Scripture on the themes of freedom in his homily during Mass, Parish Priest, Fr Eamonn O'Gorman said Dick Healy and his colleagues “had a vision of freedom and we are so blessed that they had the courage of their convictions and this is what we are celebrating today”.

The event organised by Conahy Heritage Society along with Dick Healy’s grand nephew, Seamie and his wife Siobhan, also featured a lecture in Conahy Shamrocks GAA Clubhouse on the Easter Rising by Historian, Eoin Walsh of Mooncoin.

Dick Healy was born in Kilcollan, Conahy in 1894 and attended Lisnafunchin NS and Kilkenny CBS before joining his uncle, John in the pub trade in Dublin in 1910. Dick Healy joined the IRB in 1913 and within a was a member of 'D' Company, 2nd Battalion, which was responsible for the Howth gunrunning, in which he took part. When the call came on Easter Monday, 1916, Dick and his Battalion assembled in St Stephen’s Green under the command of MacDonagh, but due to the confusion about the mobilisation orders, Healy was sent to O'Connell Bridge. He was later moved up to the GPO. On Tuesday, Tom Clarke ordered him to leave 'to wipe out a sniper'. Returning to the GPO, Dick was Clarke promoted and placed in charge of the topmost section of the GPO. Dick Healy later recalled Pearse and Connolly giving orders and also the decision to surrender. Dick Healy and his fellow-prisoners were marched to the grounds of the Rotunda Hospital. After prolonged questioning they were sent Knutsford Jail, England but were later transferred to Frongoch internment camp in Wales. There, Healy, one of the seven Kilkenny internees, played Gaelic football with many of the Irish prisoners, including Michael Collins, who set up a branch of the IRB in the prison. Dick Healy was released on the general amnesty four months later. He rejoined D Company of the 2nd Battalion at the end of 1916 and was active in recruiting and training new recruits for the War of Independence. He became an officer in 1918 and was a lieutenant in the IRA by 1920. He lived at 93-94 Parnell Street 1910 – 1924; 47 Parnell Street 1924 – 1928; Clare Road Drumcondra 1928 – 1930; 151 Parnell St 1930-1947; 43 Parnell Street 1947 – 1958 and Ormond Road, Drumcondra 1958 until he died 13/06/1982. He later worked as a barman around north inner city, sometimes owning or renting licensed premises. Dick Healy died on June 13, 1982 and is buried in Glasnevin Cemetery - From Research by the superb Roisin Healy.