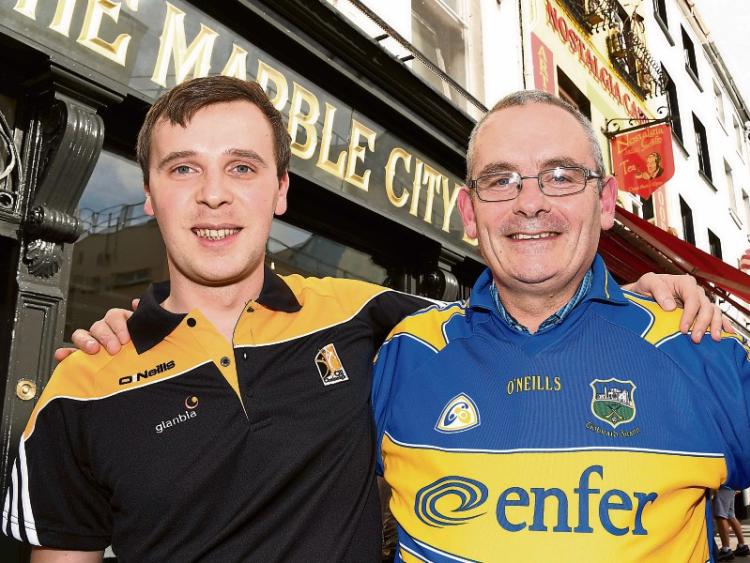 A die hard Tipperary fan, living on the border with Kilkenny, has had to rethink his attitude towards The Cats after his life was saved in the city.

On Thursday last, Mick Gahan from Mullinahone returned from the dead to the place where he suffered a coronary attack.

He wanted to say thank you to the stalwart Kilkenny fan who brought him back to life on the floor of the Marble City Bar on High Street.

Bar man, Michael Mokrzycki and other staff members reacted immediately when Mick hit the floor on the evening of Wednesday, August 3 at around 5pm.

They went to Mick's aid and administered CPR while bar manager, Ray Langton timed the procedure to ensure it was being done properly.

Mick wasn't breathing and his heart had stopped. In his efforts to resuscitate the Tipp fan, Michael could hear a number of Mick's ribs crack as he continued to press down on his sternum.

“I thought to myself, I'm going to kill him,” Michael recalled.

And on Thursday last, after exchanging hugs and a few words, Mick aged 52 and single, gave Michael a gift voucher for flights to allow him go back home to see his family in Poland.

It was a poignant moment and they both realised they had something in common, a strong faith and a resilience passed on to them by their parents.

Both men recalled how their respective fathers had told them, “Never Give Up” and so two men, born and reared thousands of miles share the same Christian faith.

In Mick's case it has added significance. His father Billy passed away in 2012 and Mick is convinced that his father acted as his Guardian Angel on that day he collapsed.

Mick's brother Liam, said that with all the giving out about the health service, he noted that the ambulance arrived six minutes after being called.

“And you know that only 2% of those who suffer cardiac arrest outside of hospitals survive,” he said.

There was praise for two security guards at the Market Cross who brought over the defibrillator as the ambulance arrived.

Mick Gahan, a well known athlete, ran cross-country for years with Clonmel AC and had never been sick before he “dropped dead” in Kilkenny.

He was in a coma for four days and his brothers, sisters, nieces and nephews took turns minding him 24 hours a day in the intensive care unit while his widowed mother, Kitty was beside her self.

“I will never forget that day or what Michael did to bring my son back to life,” she said as the tears welled up.

However, following his life and death experience and the fact that he owes his life to Kilkenny, he hasn't found it in his heart to support the Cats.

He lives just three miles from the border with Kilkenny and could never, under any circumstances shout for Kilkenny as much as he loves the city.

“We'll just about do it. I think our backs can overpower the Kilkenny forwards and drive us on,” he said.