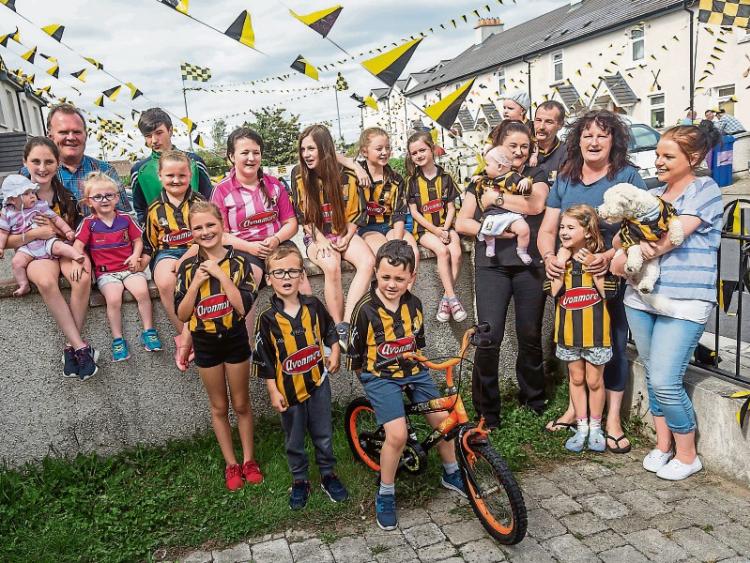 It's that time again. Housing estates and homes around the county are bedecked in black and amber in anticipation of Sunday's epic All-Ireland clash between the giants of Kilkenny and Tipperary.

Among those leading the way — as always — are the likes of Ardnore, Newpark, and the Butts. Myles Kavanagh has the house well decked out, and his neighbours on both sides of the road are well prepared.

Within the shadow of Kilkenny's home of hurling, Nowlan Park, the residents of Ossory Park are also putting their best foot forward.

Boylesports may have both counties as inseperable 9/10 shots to lift the Liam MacCarthy Cup this weekend, but in Ossory Park on Monday, there was no such ambiguity.

One resident, John Kelly, reckoned the Cats will win with 13 points to spare, while Teddy the dog had a slightly more measured prediction of a six-point win. Teddy was one of the many folk who was out wearing the jersey on Monday afternoon in the estate, which is festooned in black and amber bunting, hurls, jerseys, and other paraphernalia.

Sean Baird is one of those responsible for getting the colours up, and he made clear that everyone had a role in what he described as 'a whole community effort'.

“Just over the last week, we all came out and did a bit, and we're not finished yet,” he said.

Little Kaydan Baird was also in his Kilkenny jersey — surely one of the Cats' youngest fans. Smiling from ear to ear, he looked quietly confident of a result, the details of which he was not prepared to divulge.

Local councillor Joe Malone was also on hand, full of praise for everyone doing their best to show support for their county.

“It's great to see the community spirit — they always up their game here,” he said.

Any predictions on how things will go on Sunday?

“Michael Fennelly will be a huge loss,” said the former Mayor of Kilkenny.