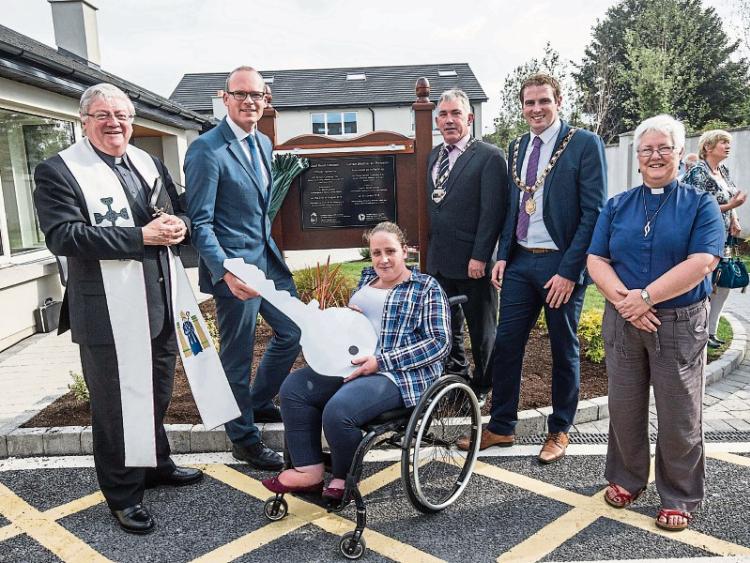 The new scheme, Gaol Road Crescent, is made up of both one and two-bedroom houses and apartments, with ground floor accommodation also. The homes have the latest energy efficiency technologies, achieving an 'A' rating, and reducing fuel costs for the new residents.

The new units meet the needs of the homeless, the elderly, the disabled and general housing needs. There are three car parking spaces and a landscaped central courtyard included.

The project is the first new housing construction scheme by Kilkenny County Council, delivered under the Social Housing Strategy 2020. It follows a long period of relative inactivity in terms of local authority builds, with just four houses built last year here, and only 74 built nationwide.

Many of the new tenants were on hand last Thursday to take the keys of their homes, and to meet Minister Coveney, who emphasised that the new social housing strategy would not be confined to Dublin.

“It is a project for every city and every town in the country,” he said.

“And that is why actually it's great that the first scheme I'm opening as Minister for Housing, led by a local authority, is here in Kilkenny.”

Funding of €1.2 million was allocated by the Department of Housing, Planning, Community and Local Government for the new buildings.

The Gaol Road scheme is the first purpose-built local authority accommodation for single tenants here. In recent years, the council has seen an increase in demand for single-occupancy accommodation, while a significant portion of Kilkenny’s housing waiting list is single people.

“And again, the social housing that we are going to see developed in huge numbers over the next five years or so will be very different to what was built in the '60s, '70s, and the '80s. It will be better. And most importantly, it will be contributing to better communities as well.”

“The model here at Gaol Road Crescent is a true example of a community neighbourhood and illustrates how the provision of social infrastructure and well designed housing units can provide a holistic approach to the development of our towns and villages,” said Ms Byrne.

Minister Coveney acknowledged the work done by Kilkenny County Council in bringing the scheme to fruition, and also the teams involved.