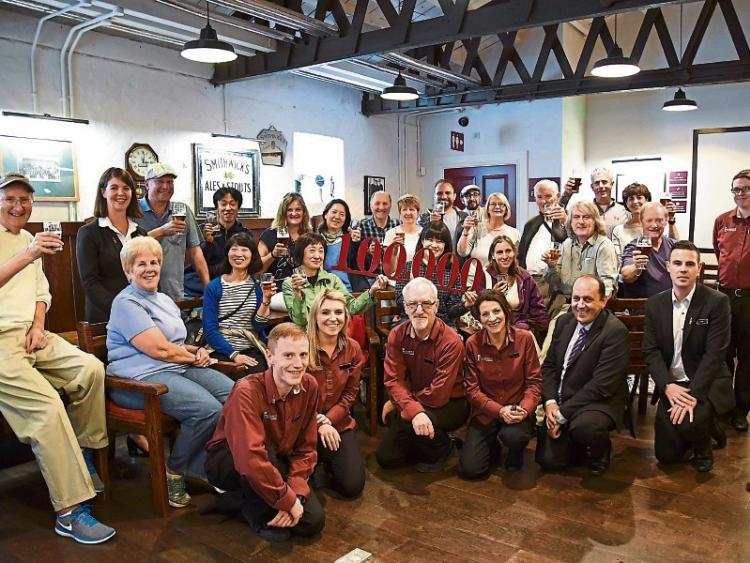 It's an experience that over 100,000 visitors to the city have enjoyed in just under two years and figures for the last few months show a further 20% increase in people entering the Smithwicks Experience on Parliament Street, Kilkenny.

On Wednesday afternoon, the 100,000th person passed through the famous arched Smithwicks gates located at The Ring, down the cobbled walkway off Parliament Street.

Those on the tour included a family from Florida, a group from Japan, a couple from Germany and a number of Canadians.

“We thought it was superb and really educational and fun,” Tom Trait from Kissimmee, Florida said.

He has Irish grandparents and said that it was a definite highlight of his family's trip to Ireland.

He was delighted to be in the group going through the attraction that included the 100,000 visitor.

Mark McGovern, manager of Smithwicks Experience has been involved since day one of the project and is thrilled with the numbers and the fact that it is already ranked No 2 on TripAdvisor for Kilkenny's favourite attractions.

“We couldn't be happier with the mix of home and overseas visitors and in particular with the continued increase in the number of US visitors,” he said.

“The feedback is terrific and it is a great success for us and for the city, “ he added.

l  Welcomed over 30 nationalities through the gates

l  Visitor numbers this summer are up 20%.

l  Listed last year in ‘New in Travel’, the top 26 hottest new attractions in the world to visit by The Lonely Planet

l August 2016 was the busiest month since the visitor centre opened.

l Included in the list of attractions that are on the recently launched Medieval Mile pass.