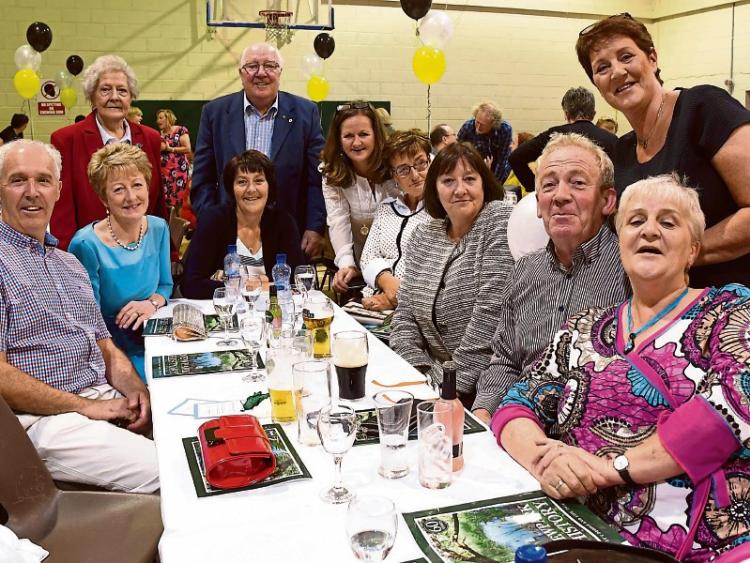 They came from Boston, USA, Toronto, Canada, Australia, Europe, London, Manchester, Birmingham, Liverpool as well as the length and breadth of Ireland for the 60th Anniversary Reunion of Newpark.

Yes over 400 residents and former residents of Newpark Lower & Upper (Johnswell Rd) gathered at O’Loughlin Gaels GAA Clubhouse for a truly magnificent reunion. The event had been seven months in the planning and the organising committee deserved the highest of praise for a superbly organised event

The chore of providing the food was most competently served by brothers Alan & Ray Cullen of Cullen Outdoor Catering and their friendly staff with no small assistance from Newpark resident Ann Hayes. Despite the disappointing hurling result of the previous Sunday at Croke Park the room was festooned with the black & amber balloons and colour. The irrepressible Newparkonian thespian Ger Cody, Manager Watergate Theatre was the genial Host/MC for the evening.

Kilkenny County Council was represented by its Chairman Cllr Matt Doran and the city by Cllr Patrick O’Neill, Mayor of Kilkenny. Both spoke in glowing terms of the warmth of the people of Newpark and the wonderful community sprit which has existed amongst its people for many decades. The pivotal importance of Newpark Fen as an amenity area and the uniqueness of its beauty as well as the diversity of its wildlife habitat was touched on by the speakers.

Organising Committee Chairman Donie Butler stated that “it was such a satisfying occasion to see so many happy faces and such a pleasure to welcome everyone back to the townland of Newpark in the civil parish of St Mauls”. He asked his committee “to individually take a bow for all the hard work which they had put in over many months, culminating in tonight’s special and splendid occasion”.

Continuing Donie thanked “all the many local businesses of the general Newpark area who had so readily supported the occasion with sponsorship especially McCarthy/Europsar, Pat Bergin & Sons Logistics, Xposure Hair Studio & Newpark Hotel”. Sheila Donnelly, Manager of Newpark Family Resource Centre & Frank Cody came in for special praise for their wonderful support and assistance throughout the year.

The Chairman’s final wish was that a Newpark Residents Association and perhaps a Tidy Towns Group would be established in the very near future to look after the needs of the community and the area long into the future. A great night of revelry lasted long into the early hours of Saturday morning. Stories and memories both sad and happy were recalled in abundance.