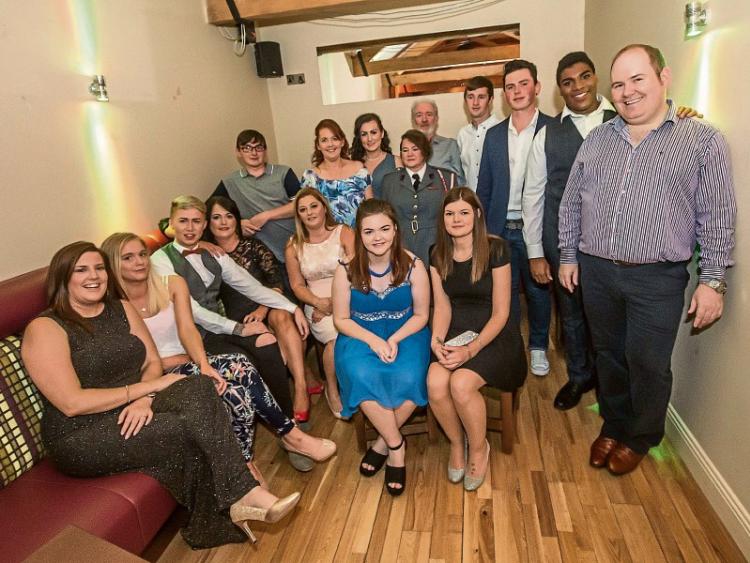 There was great excitement in the Orchard House on Saturday night as the dancers in the upcoming Strictly Order of Malta were revealed.

The setting was apt as the Orchard House have always had strong links with the Kilkenny Unit of the Order of Malta and indeed are the main sponsors of the event.

Out in force were the twenty dancers, the judges and organisers of the event, along with a large number of friends, family and supporters. Excitement built leading up to the reveal of who was paired with who, and what dance they would be performing on October 15 in the Hub at Cillin Hill.

The first to be announced was Deputy Kathleen Funchion, no stranger to the Strictly format as she performed last year for John Lockes GAA club – on election night no less! She was so excited to find out she’ll be dancing the jive – her favourite dance - with local farmer and Ambassadors Wedding Band keyboard player James Rice. Next up was Councillor Malcolm Noonan, who is delighted to be paired with Lieut. Heather Woods, former Officer in Charge of the Kilkenny Order of Malta, who was resplendent in her No. 1 Dress Uniform for the occasion. Other couples announced were Lisa Kiely and Anthony Dawson Doyle, Grainne Aspel and Dylan Hayden, Lorna Gleeson and Ben Lawlor, Pawel Jankiewicz and Kara O’Donoghue, everyone’s favourite Credit Union loan officer Richard O’Connor and Nicola McGrath, Serge Walshe and Linda Lawlor, Tom Lanigan and LesleyAnn Brophy, and finally, an all-girl combination of best friends Amy Michelle Meany and Valarie Holden – who will be performing a “showdance” but choreographer Audrey Kelly refused to be drawn further on what that actually meant!

After the excitement of the reveal, a surprise was sprung on the unsuspecting dancers as the party made its way onto the roof where they were to perform their group number. Even after only two weeks of rehearsals this looked absolutely spectacular and really showed the dedication and hard work that these volunteers are willing to give for such a worthy cause.

Then it was the judges turn – Representing the Order of Malta is Kilkenny Officer in Charge Lieut. Gillian Kelly, also in her No. 1 uniform, who promised not to act like a Sergeant Major on the night! Local ballroom champion and dance teacher James O’Dwyer agreed to accept bribes, as did the final judge, who possibly caused the most excitement in the room that night. Presentation Choir director and Simon Cowell’s favourite teacher Veronica McCarron came out straight after choir practice to attend the event and is very excited to be taking part. She said that she will be judging the dancers purely from a performance point of view and will be looking for “passion in their eyes” when they dance.

Formalities over, the group partied the night away before the hard work really begins in earnest. The Order of Malta are delighted to have local people willing to give their time (and bodies!) to help them in their Home Sweet Home campaign. The Kilkenny Unit of the Order of Malta has been serving the people of Kilkenny since 1939, but still has no official base to call home. The Home Sweet Home campaign aims to raise €200,000 over the next 12 months to assist them in their quest.

Without the Order of Malta many events in Kilkenny could not happen – they are at every match (and concert!) in Nowlan Park, the Cat Laughs Comedy Festival, the St Patrick’s Day festival and many teenage discos in addition to providing three vehicles and 10 personnel every single race day at Gowran Park.

The members are all volunteers and the unit receive no Government funding for their work. Members come from all walks of life, and include First Aid Responders, Emergency Medical Technicians, Nurses, Doctors and Paramedics.

Tickets for the event are limited, and sure to sell out quickly! This great night of entertainment is available at €20 per adult and €10 per child. Family tickets of 2 adults and 2 children cost €50. Tickets are available from any dancer, by calling Rebecca on 0862888559, emailing omackkstrictly@gmail.com or online at Eventbrite.ie/e/strictly-order-of-malta-tickets-27245957392. Corporate packages and VIP tickets also available. With incredible spot prizes and DJ after the event.