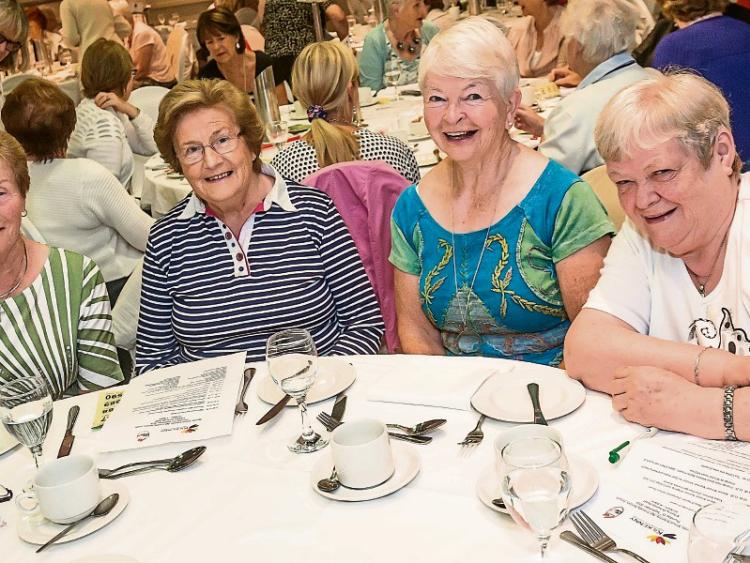 A leading policy document on dementia was launched at the Kilkenny Age Friendly Seniors' Forum at the Ormonde Hotel last Thursday.

Chairperson of the Seniors Forum, Mary O'Hanlon welcomed the Minister for Older People and Mental Health, Helen McEntee along with other public representatives to the day-long event.

There was a large attendance from all corners of the county at the forum. Outgoing chairman, Nickey Brennan described the Memory Matters policy as 'a very significant piece of work'.

Mr Brennan said that the Alliance was in the process of updating their next strategy and were looking at the use of outdoor spaces and buildings. He commended the local authority for their work in relation to the upgrading of footpaths and provision of seating.

He also said that the Alliance is working with the Manager of St Luke's Hospital, Anne Slattery in relation to a number of initiatives including making St Luke's an age friendly hospital. The Alliance are also developing Age Friendly Businesses at Mac Donagh Junction Shopping Centre. Mr Brennan told the attendees that he was stepping down as chairperson and the role would be filled by CEO of Kilkenny County Council, Colette Byrne.

Minister Helen McEntee thanked the Age Friendly Forum for inviting her to speak.

“I think very highly of Age Friendly Ireland both locally and nationally. We have a growing, aging population and the figures for dementia will only grown. It is incumbent on us to learn more about it,” she said.

The Minister also spoke about the fear and stigma about growing older.

“There are a lot of challenges from an aging population but there are also a lot of good points. Growing old should not be seen as a burden to society but it should be celebrated.” The Minister described 'Memory Matters' as 'a fantastic policy document'.

Patricia McEvoy , Manager of Older Person's Services in the HSE in Carlow and Kilkenny and the Project Lead in Memory Matters said that the project was about building a better health service for people living with dementia in the community.

The project is co-funded by the Genio Trust and reveals that there are 1536 living with a diagnosis of dementia in Carlow and Kilkenny. The report shows that 807 people aged 85 years or over have dementia while 18 people in the 30 to 59 age bracket are also living with the disease.

The key objectives of the project are inclusion of the person with dementia, supporting individuals with complex card needs, providing flexible person-centred home care packages, provision of assistive technology, provision of dementia specific awareness programme and having an ongoing media campaign.

Ms Debra O'Neill, who worked as a consultant on the project said that 104 people were referred to Memory Matters and 67 were approved and consented. Nine participants were over 90 and some of these people were been cared for at home by an older spouse. 38% of participants continued to live alone while 34% lived with their spouse, who is their main carer. 88% of carers were family members. The report also showed that 18% of people had advanced dementia and complex care needs.

Before the project 18% of participants had not accessed Home Help, while 62% had never accessed Respite Care.

21,024 Home Help hours have been delivered to participants of the project by the end of April and 175 Home Helps across Carlow and Kilkenny received project specific Memory Matters dementia training and training was also provided to 154 Health Care Professionals. In total project participants remained living at home for an additional 14,353 collective nights. 38 dementia specific Telecare packages were provided to 34 homes. These monitored telecare packages supported independence, safety and reduced carer's stress.