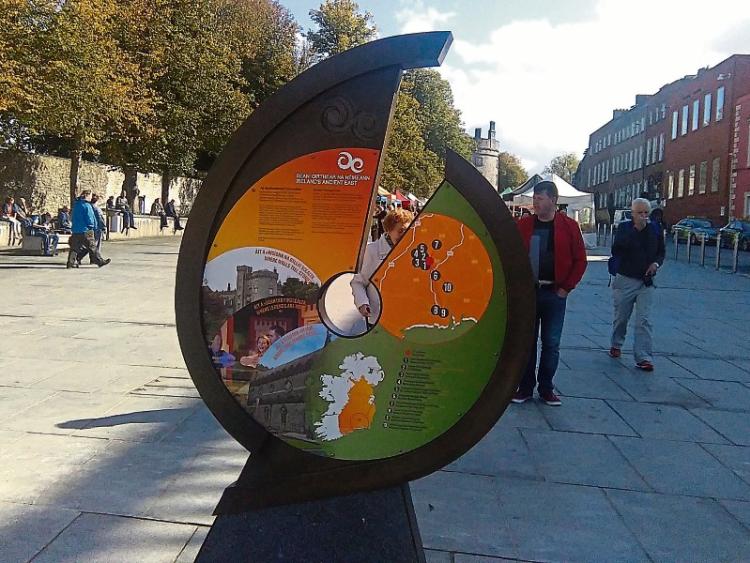 The branded orientation signage is being rolled out at 80 key sites throughout the south-east by the end of the year. Shaped as a large spiral wheel, each sign highlights a range of sites within up to 60 minutes’ drive away from the sign location — to encourage visitors to extend their stay.

However, the new signs — one of which is located on the Parade, and another near St Canice's Cathedral — have not found favour with everyone. Several people have contacted the Kilkenny People in recent days to voice their discontent.

Among them is local councillor Malcolm Noonan, who has criticised the signage as 'gaudy' and 'vulgar'.

The Green Party councillor has previously raised issues regarding signage and its uniformity around the city, pointing to the various different examples already in place, including new maroon street name signs, the old cast iron ones, new Medieval Mile branding and totem poles.

Cllr Noonan says that many locals are unhappy with the size, colour and shape of the signs — as well as lack of consultation with local councillors or the public.

“Local people here in Kilkenny are quite rightly annoyed as this signage appears on already cluttered street, where there are three or four different styles of directional signage and no apparent coherence to it all,” he said.

“We think that Failte Ireland should be subject to the same planning requirements as any private developer and not be exempt from erecting signs of this scale with no public input. Furthermore we are calling on Minster Coveney to make the development of public realm plans mandatory within all Development Plans.

“This will give clarity, consistency and lead to well-designed public spaces that will enhance economic and social activity as well as places for people with disabilities.”

The Green Party is now calling on the Minister for Housing, Planning and Local Government to make the development of ‘public realm plans’ mandatory for every town and city in Ireland. The party claims that clear guidance needs to be given to local authorities in planning well designed and inclusive public spaces that respect the unique form of Irish town planning.