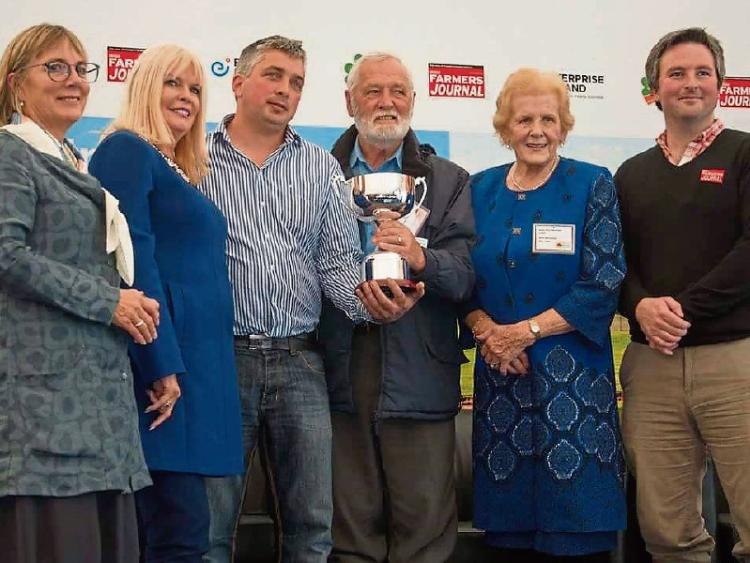 A Kilkenny farmer has beaten a number of major companies to win a hugely significant award.

Pioneering Tom Carrigan from just outside the city in Clara also won €15,000 in prize money for his bale chaser which was voted best newcomer and overall winner in the Innovations arena at the prestigious National Ploughing Championships.

An engineering graduate from the University of Aberdeen, the idea for his machine was borne out of necessity on his own farm.

Tom, seems to be a bit of workaholic, between farming and inventing the bale chaser which took him nearly four years to complete.

The 36 year old is married to Brenda and the couple have two little daughters, Ella and Abbie.

The bale chaser works by self-loading 16 round bales and then offloading them into neat stacks of eight bales at a time.

It takes about 15 minutes to load the chaser and seven minutes to unload, with no need for a tractor-front loader.

When laden, the bales are safely restrained on board so safety is massively increased.

The bale chaser contains some serious metal and Mr Carrigan’s engineering background gave him the added impetus to see it over the finish line.

He was quick to thank Enterprise Ireland for all their help and the McHale company for assistance with patenting the bale chaser.

All the design and manufacturing work for the machine was done in Clara at tom's farm.

Asked about the secret of his success he said: “I seem to have a disease for making machines.”