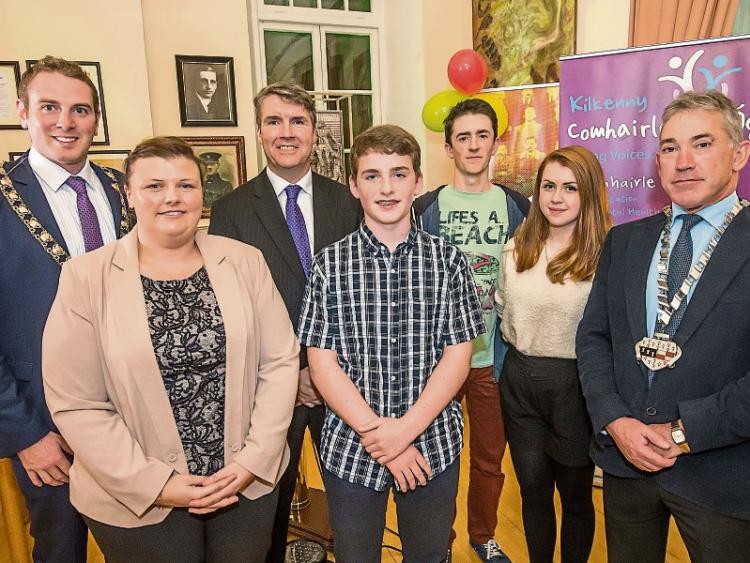 The importance of listening to our young people was highlighted at the launch of the findings of the Mental Health School Flag Project at City Hall on Monday evening.

The Ombudsman for Children, Doctor Niall Muldoon launched the important evaluation report of a unique youth mental health project that began in Kilkenny and could be rolled out all over the country.

Chairperson of the Kilkenny Comhairle na Óg, Malcolm Noonan welcomed guests to the launch and stated that it was 'a great honour to be involved in this project'.

In 2013 Kilkenny Comhairle na nÒg (Kilkenny’s Youth Council) came up with the idea of creating a Mental Health School’s Flag similar to the Green Flag, for schools who took part in mental health and wellbeing initiatives among staff and students. Upon conclusion of a pilot study in Kilkenny, the idea caught the attention of St Patrick’s Mental Health Services in Dublin.

An evaluation report carried out by Dr Gerry Jeffers of NUIM has been launched by the Children’s Ombudsman. The evaluation of the project was commissioned by Comhairle and Kilkenny County Council to determine how the project might be rolled out nationally and to learn from those who participated in the pilot study, as to what supports are needed in schools to deliver effective and safe mental health programmes.

Kilkenny Comhairle na nÓg is facilitated by Ossory Youth with all initiatives and ideas for civic engagement or influencing change coming from young people involved in Comhairle.

Cllr Noonan commended the 'inspirational young people' involved and added that we 'must ensure collaboration so that all schools are safe and healthy places to be'.

Mayor of Kilkenny, Patrick O'Neill spoke of his first hand experience of the importance of mental health and said three of his friends had died by suicide.

“Young people are the key. This initiative is great, going into schools to address topics like bullying.

“Mental health is very important and I would like to thank the three schools (Colaiste Mhuire, Johnstown; Kilkenny VEC and Duiske College in Graignamanagh) that have got involved,” he said.

Caothairleach Matt Doran congratulated all involved describing it as ' a truely wonderful project'.

However it was the young participants who conceived, created and participated in the project that shone on the night. Ciara Delaney spoke of bringing the project to fruition while Ben Lanigan bravely shared his first hand experience of been bullied and Ben McDonald spoke of the need for the Mental Health Flag to be developed further adding that there is still taboo around mental health in teenagers.

Dr Muldoon highlighted the importance of listening to our young people and said that the programme is very much to be welcomed.

“I want to commend and congratulate all involved for their hard work in rolling out the pilot project,” he added.

“We can't go wrong if we listen to the voices of our people,” added Cllr Noonan.