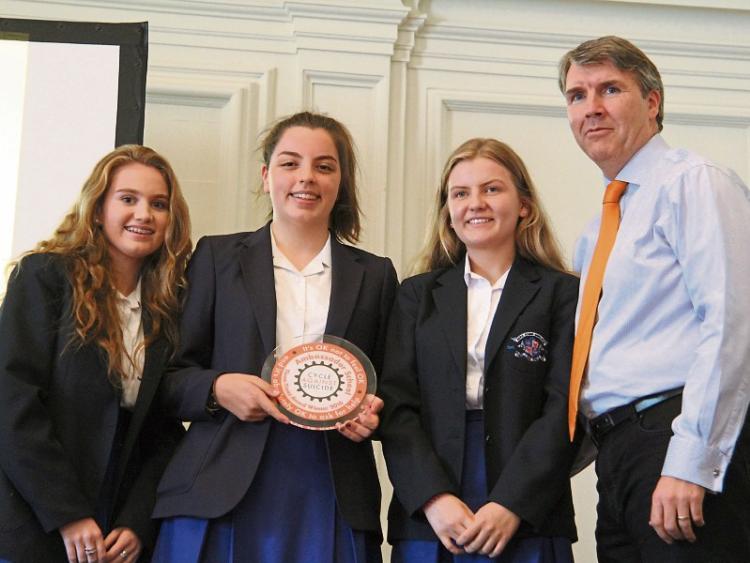 Loreto Kilkenny has again been awarded the prestigious status of 'Ambassador School' by mental health advocacy group Cycle Against Suicide.

The award is in recognition of the school's fulfilment of the 'Five Gears', and an exceptional commitment to the promotion of positive mental health. Loreto was represented at the recent awards ceremony in Dublin by Link Teacher Claire Treanor and students Muireann O’ Connell, Anna Phelan and Molly Purcell. They are understandably very proud of their achievements.

“It’s wonderful to attend such a positive event, and have the efforts of the students recognised. Our participation in the Ambassador School Programme has had an enormously positive impact on our school community, fostered a school-wide approach to the promotion of positive mental health, and provided incredible opportunities for student leadership.

This is the third consecutive year that Loreto Kilkenny have been awarded this Ambassador status. The programme, one aspect of a wide range of Cycle Against Suicide initiatives, is school-led, and involves the completion of 'Five Gears' aimed at raising awareness of the message that 'It’s OK not to feel OK; and it’s absolutely OK to ask for help'.

Minister for Education Richard Bruton congratulated the schools which completed the programme.

The founder of Cycle Against Suicide, Jim Breen, thanked the Ambassador schools for 'their extraordinary commitment to breaking the cycle of suicide on the island of Ireland'.

“Each of them has gone the extra mile to raise awareness of our message, empowering themselves and others to build resilience, and seek help when necessary,” he said.

“The efforts of these school communities, teachers, students and parents, is changing the mind-set, behaviour and culture of an entire generation.”