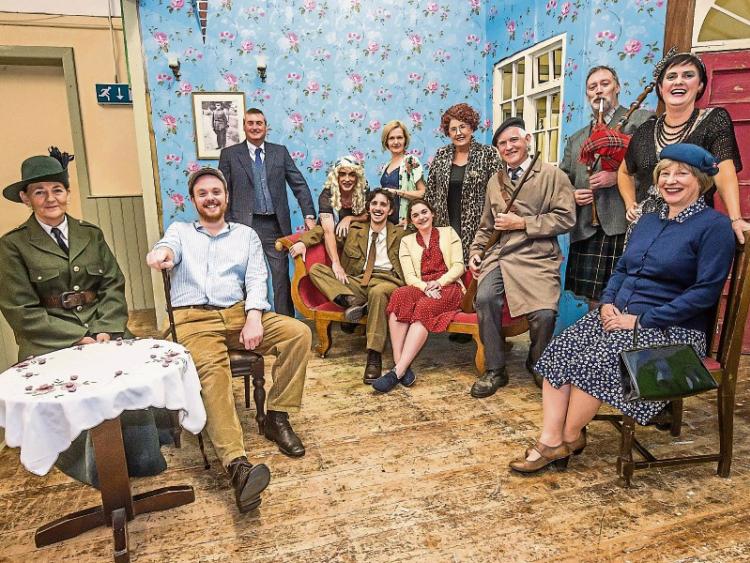 Well this is certainly the case for the cast and crew of Gowran Little Theatre Group who this week are putting the finishing touches to director Andrew O’ Leary’s interpretation of ‘The Hostage’ By Brendan Behan ahead of its performance in Gowran Parish Hall on October 21 to 24.

‘The Hostage’ marks the groups fifth production and Andrew has directed three of these; The Cripple of Inishmaan by Martin McDonagh, ‘It’s the Real McCoy’ by Tommy Marren and ‘Moonshine’ by Jim Nolan with Kilkenny based Dee Gibney directing last year’s production of ‘Wake in the West’ by Michael J. Ginnelly.

‘The Hostage’ depicts the events leading up to the planned execution of an 18-year-old IRA member in a Belfast jail, accused of killing an Ulster policeman. Paddy O’ Leary (ahead of jetting off to study theatre in the UK) will play the title role of Leslie A. Williams, the young hostage, being held in a Dublin based brothel run by Meg and Pat being played by Orla Kelly and Peter Madden. The tender love interest of the hostage, Teresa, is being played by Ellen O’ Donnell who will be appearing with the group for the first time. The show boasts a series of many coloured and varied characters and Judith McCormack, Dickie Dreeling, Derek Lawler, Kirsten Neale, Siobhan Maher, Ann Farrell, John Kennedy Paul O’ Donnell and Michael Browne will complete the large ensemble involved on stage for this year’s production

Pivotal to the success of any show is the backroom team and with Andrew O Leary directing the show is in very safe hands. Mary Walsh will be assisting Andrew with the shows direction with stage management in the very capable hands of Sandra Twomey. The very talented artist and sculptor, Julie Moorehouse will be looking after set design and costuming, Eileen Byrne will be leading the front of house team for the show’s run.

Stage Manager Sandra Twomey said “The lines are learned, the set is built, the stage is dressed, the props are sourced, the bookings are pouring in fast…The last ingredient is the show and this year audiences are in for a tour de force of theatricality”

Booking for the show running for four performances only (October 21-24) through box office manager, Brian McCormack on 087-4036340 or by emailing gowranlittletheatre@outlook.com