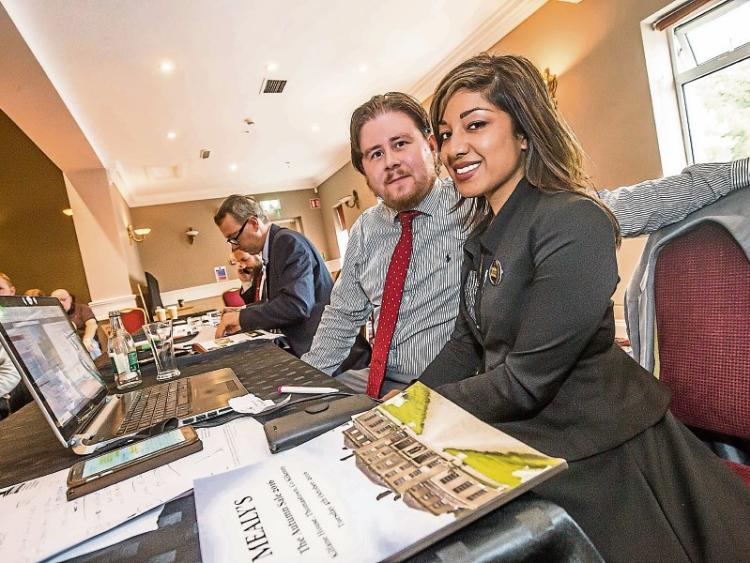 It was like a scene from the Antiques Roadshow programme on BBC 1 television, with thousands of people, turning up to view an old, slightly dilapidated period home, bursting with history and of course the mandatory ghost story.

As I boarded the shuttle bus from the Longman, pub and restaurant for nearby Kilfane house, I was struck by the wide eyed anticipation of the old foggies on board. Many had their own memories of Kilfane, like Mary and Jimmy Holden.

Others on the bus recalled garden parties held by the altruistic American owners, the “Clarkes of Atlanta”.

Others had more prestigious associations going back to the time of the Poper family who held it for generations.

Another man from the area, the wonderful Michael Holden explained that the last member of the Power family left Kilfane House in 1966.

He recalled that the Land Commission took over the estate on the death of the last Power, Mrs Florence Evans Johnston, who was quite a personality herself

“Thus ended the family's association with Kilfane, the house, gardens lands and of course the marvellous man made lake nearby.

Anyway, once we got off the bus we were met by this charming old house that simply begged to be entered.

We walked into the house and we were immediately struck by the ornate figures of all sorts in every corner and on every wall.

It was sad to see much of Tony O'Reilly's stuff being auctioned off.

Every piece from his pile in Kildare, had an orange mark on it and it turned out that the bidders, all astute buyers, were willing to pay a little more for that orange mark.

And I thought to myself why would one man, Tony O'Reilly need so many of the same type of thing in the one house and I realised that people collect expensive antiques just because they have the price of them.

The auction was held in the Longman pub and restaurant which proved an excellent place to hold such an auction and where the food was excellent.

A number did not reach the reserve put on them by George Mealy and his son Georgie. they and their family did a fantastic job and should be thanked for bringing such wonderful business to a rural part of Kilkenny.

Over 250 people bid in the room, with 1,500 online bidders and 500 telephone and absentee bidders.

One of the most astute and respected commentators on antiques in this country, Kilkenny man, Michael Parsons, who works with The Irish Times was there and was telling me about the pair of 18th-century tables formerly owned by Mr O’Reilly which made €145,000 – 10 times the estimate of €10,000-€15,000.

Mealy’s said they were bought by a “trade buyer” following a bidding battle involving several dealers on the telephone from London. The “rouge” marble-top tables had been catalogued as “an extremely fine rare pair of 18th-century carved, painted and parcel gilt console tables, probably Italian”.

There was speculation among some auction-goers that the tables had once been in Burlington House on Piccadilly in London (once a private house, now home to the Royal Academy) but Mealy’s said this could not be confirmed.

After the sale, George Gerard Mealy said that the “strong and documented provenance” had been “a very significant but intangible factor in determining the prices realised”.

He also noted an increase in demand for antique furniture, “a market which appears to finally be on the rise after a long hiatus” .

The swan neck pediment above a central urn, above a circular painted dial with Roman numerals, and a subsidiary dial for seconds, signed on the dial, flanked to either side with a turned column, the inlaid trunk with canted corners and a nicely figured door panel, and raised on a moulded and cross banded box base.

A pencil drawing of Kilkenny Castle, from the Formal Garden, realised €280 and it is staying in Kilkenny.

A painting attributed to Henry O'Neill (1798-1880) of Kilkenny Castle from John's Bridge, depicting figures on the river side walk, inscribed Kilkenny Castle lower left, 18" (45cm)h x 26" (66cm) made €2800 and again purchased by agent from Kilkenny city.

An old linen scroll map of Kilkenny, and bordering counties, on a mahogany roll made €120.

A comprehensive report from February 1802- November 1819 of the private theatre in Kilkenny regarding meetings, members, playbills, various public dinners in honour of certain members, a list of all performers and performances, distinguished persons attending the play, lists of donations, newspaper extracts, epilogues, etc.. It has addresses to Richard Power Esq; of Kilfane House, together with replies to other members of the Power family which are frequently referred to in the report, half cast Irish binding with marbled boards, 8vo, tooled panel spine with tiles went for €1,600 to a UK buyer.

An important Irish William IV period mahogany serving or hall table, reportedly from Kilkenny Castle, with a back crested with vines and leaf scrolls, above three oblong panels, each flanked with a leaf carved scroll corbel, and a further corbel to either end, with an inverted break front top, with a pair of frieze drawers to either side, and supported by four leaf carved monopodia, each of scroll form with lion mask and lion paw foot, and paneled pilasters to the rear, and raised on two square moulded plinths, made €5,400 bought by Irish trade

The rectangular hinged top enclosing a hand mirror and various silver mounted jars, boxes, shaving stick holder, ink pot and bottles etc, each piece with the Montmorency family crest of Castle Morres Co. Kilkenny, London 1836, the base with a concealed drawer, enclosing cut throat razors and manicure implements, the outside top with a brass escutcheon with the crest made €800 and is staying in Kilkenny.