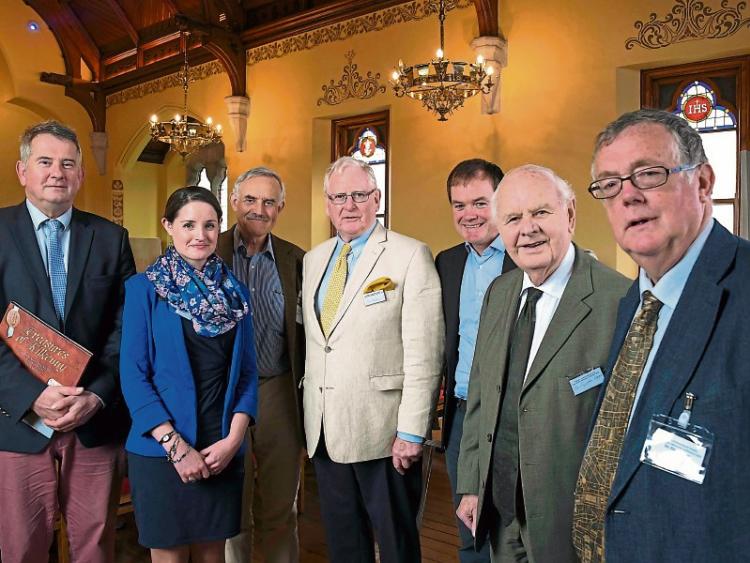 The academic, historian and archaeologist, John Bradley was remembered at a two day seminar, named after him at the weekend, writes Sean Keane.

And it was sad that on Sunday, one of his greatest supporters, writer Margery Brady of the Kilkenny Archeological Society passed away.

The success of the conference was best encapsulated by the remark of a young graduate from the North of Ireland who said: “Each of the authorities I cited in my MA thesis is in this room tonight.”

Even allowing for student exaggeration his comment encapsulated the incredible drawing power the late John Bradley among his peers in the area of Irish archaeology and related history.

More than 50 of the leading authorities on these topic gathered to pay tribute to the man. Certainly he was Kilkenny and perhaps Ireland’s most prolific historian and writer of his age. His corpus of published works includes 14 books and over 130 peer reviewed articles in many of Europe’s leading journals and reviews.

His contribution to uncovering the history of Kilkenny city and County features very largely in this impressive total.

The evening continued with a lecture delivered by Kilkenny born, Mr Con Manning of the Office of Public Works and former president of Royal Society of Antiquaries of Ireland. Friday evening’s proceedings concluded with the Conference dinner held in the Club House Hotel, a favoured haunt of John’s during his frequent visits home.

Saturday saw Dr Angela Byrne of the University of Greenwich address the finding of a hitherto unknown visitor to Kilkenny in 1803, Mr John Lee.

Fortunately he recorded his visit here in great detail and especially his venture into Dunmore Cave.

The conference keynote address, kindly facilitated by the Heritage Council, was given by Dr Kieran O Connor, NUI Galway.

Following lunch, Dr Pat Wallace, Director Emeritus, The National Museum held forth in his forthright, robust manner on the problems and aspirations of Irish archaeology.

He concluded his address with charming readings from many of John’s legendary post-cards from numerous locations in Europe and further afield.

These were full of insightful - and often humours - asides. In an at time emotional vote of thanks Professor George Eogan, retired Profession of Archaeology in UCD, and John’s first mentor, referred to the excitement he and fellow lecturers felt on first meeting this young man from Kilkenny on arrival in UCD who even then was clearly destined to loom large on the archaeology world stage.

The final lecture was delivered by Cóilín O'Drisceoil of Kilkenny Archeology who spoke about the mediaeval walls of Kilkenny - the first subject that John had addressed in his lifetime and on which the first of his many published articles was based.

He was a mere 20 years old at the time the Kilkenny Archaeological Society published his findings in the Old Kilkenny Review.

This lecture was followed by Cóilín leading the assembly on a walk to parts of the surviving city walls before focusing on the final remaining gate. This was another erudite, knowledgeable and informative exercise by Cóilín and richly enjoyed by his enraptured audience.

A comment overheard at the conclusion was that “the [archaeological] torch has been passed to a new generation” and while we salute John Bradley it is fitting that the prowess of Cóilín be acknowledged and equally be applauded.

Plans were announced for the second such conference in October 2017. John Bradley was an internationally renowned archaeologist, conservationist, medievalist, scholar, teacher and writer. His corpus of published works include 14 books and over 1000 per reviewed articles.

He was active in supervising BA, MA and PhD. Theses at Maynooth University, while his involvement with many publications under the auspices of the RSAI has added to that body. He travelled widely and his many writing and lecturing activities spanned numerous American engagements.

It was the realisation of his outstanding contribution to archaeology that is the catalyst for this memorial conference in his honour in his native city by Kilkenny Archaeological Society, with most welcome assistance from the RSAI and Kilkenny County Council.