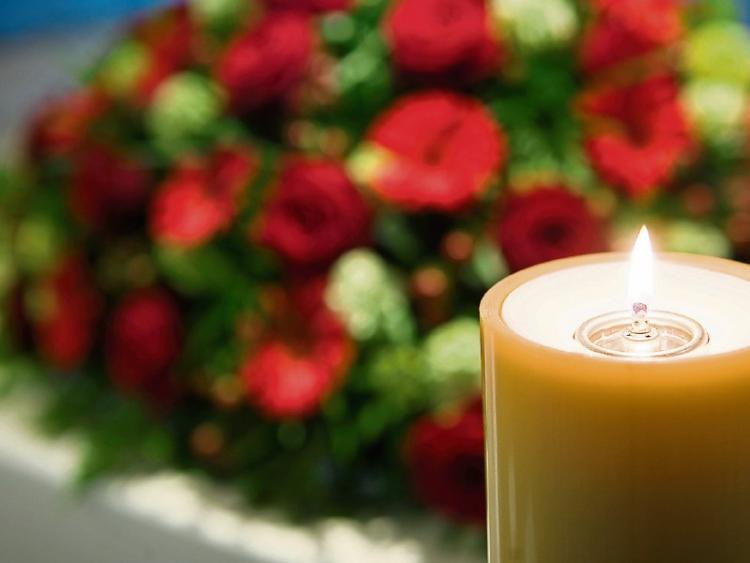 Reposing at his home from 3 o'clock on Thursday with Rosary at 7 o'clock. Removal on Friday morning to St. Brigid's Church, Ballycallan, arriving for Requiem Mass at 11 o'clock. Interment afterwards in Ballykeeffe Cemetery. House private on Friday morning please. Family flowers only. Donations, if desired, to the MRI Scanner Fund at St. Luke's Hospital.

Reposing at Patrick Ryan & Daughter Funeral Home, Greenford, Middlesex on Monday, 24th October, from 4pm with Removal at 6pm to Our Lady of the Visitation Church, Greenford Road. Requiem Mass on Tuesday, 25th October, at 10am. Burial thereafter to Greenford Park Cemetery, Middlesex. Mass on Saturday, 22nd October, in St. Nicholas' Church, Windgap at 7.30pm for the repose of his soul.

Reposing on Thursday at St. Joseph's Care Home (Little Sisters) Ferrybank from 6pm with prayers at 8pm. Arriving on Friday at St Senan's Church, Kilmacow for Requiem Mass at 11am. Burial after in adjoining cemetery.

Reposing at her daughter Geraldine's home at Baunreagh, Stoneyford from 4 o'clock on Tuesday with Rosary at 8 o'clock. Funeral Prayers on Wednesday morning at 9.45 o'clock followed by removal to St. Leonard's Church, Dunnamaggin for Requiem Mass at 11 o'clock. Interment afterwards in Kilmoganny Cemetery. Family flowers only please. Donations, if desired, to St. Joseph's Home, Kilmoganny.

Barry will repose at home on Tuesday from 4pm until 8pm. Funeral arriving to the Holy Rosary Church Greystones on Wednesday morning for 11.30am Funeral Mass followed by interment in Redford Cemetery Greystones.

Family flowers only please. Donations if desired to the special children in Ellie’s school, St Catherine’s Newcastle Co Wicklow, which held a place in Barry’s heart.

The death has occurred of Simon (Sonny) Walsh, Wexford and Kilkenny.

A memorial mass, will be held on Saturday 22nd October at 11am, for Mr Simon (Sonny) Walsh in Rathgarogue Church, Co Wexford.

Burial of ashes will take place after Mass.

The late May Fitzpatrick (nee Bannon)

The death has occurred of May Fitzpatrick (née Bannon) Coolcashin, Geataban, Kilkenny, wife of the late Sonny, in her 98th year. Sadly missed by her loving sons Tony, Hugh, Vincent, Joe and Jim, her daughters Carmel, Harriet and Pauline, her grandchildren, great grandchildren, daughters-in-law, sons-in-law, nieces, nephews, relatives and friends.

Reposing in Johnston's Funeral Home on Tuesday evening from 6pm to 8pm with Rosary at 7.30pm. Funeral Service on Wednesday afternoon at 2pm in the Garden Chapel at Mount Jerome Crematorium, Dublin. Family flowers only. Donations, if desired, to the Irish Heart Foundation.

Beloved wife of the late Jim Murphy passed away peacefully in the tender care of the staff at Mowlam Nursing Home, Waterford. Sadly missed by her daughter Edel, son- in- law Con, grandchildren Kevin, Luke, Aaron and Kim, nieces, nephews and all other relatives and friends.