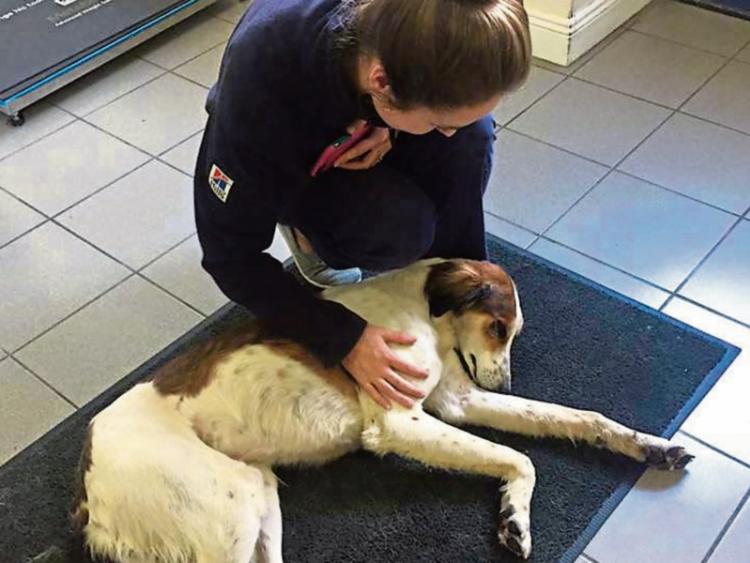 Seamus is re-united with his delighted owner Tara.

A rescue dog who was stolen from his new home in Cuffesgrange almost three weeks ago has been re-united with his owner today after Gardai managed to locate him.

Seamus, a brown and white lurcher/saluki, was taken from his dog pen on October 14, and his heartbroken owner Tara Roche has been at her wits’ end looking for him. There was a huge response on social media to a Kilkenny People story looking for information about him. Tara received phone calls from all over the country from people offering their support, sympathy, and possible sightings.

Gardai found Seamus this morning, and it's understood that there is an ongoing investigation into how the dog came to be in the possession of the individuals with whom he was found.

Tara, who is a veterinary nurse at Callan Veterinary Clinic, was overjoyed to be reunited with her beloved pet. He is in reasonably good condition – he has lost some weight and has a nasty gash under one eye, but is otherwise fine.

“I have been everywhere trying to find him,” a delighted Tara told the Kilkenny People.

“Thankfully, in this case, it was a happy ending. I can’t thank everyone enough for all the publicity and help – he probably wouldn’t have been found by the Gardai otherwise. They took it very seriously.

“I had calls from all over the country – people telling me they were looking for him, people conveying their best wishes. One lady in Wexford rang me everyday and put up posters all over Wexford.

“People are great. Horrible people took him, but people have just been great.”

Tara now says she is not sure how safe she feels leaving her dogs at home when she is away. Seamus’ pen had a high fence, a roof and was re-inforced and double locked. The people who took him tore it apart in their efforts to get him.

Seamus is now safely back home and looking forward to a long nap beside the fire.