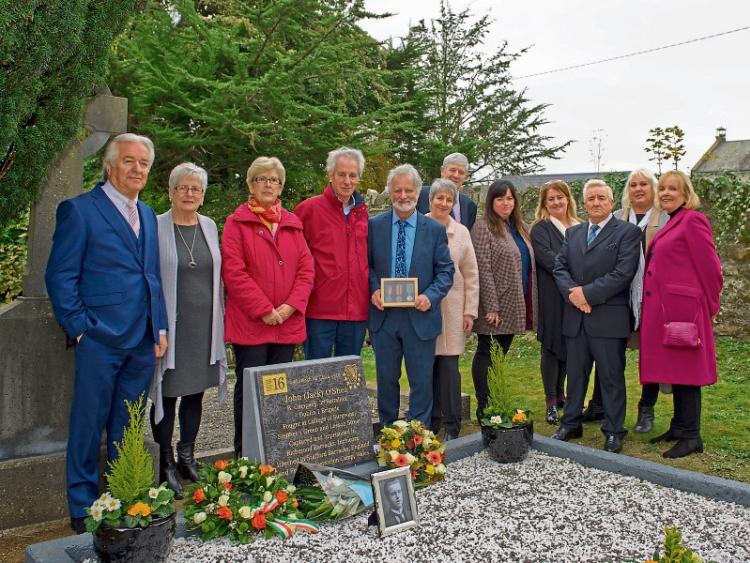 As celebrations to mark the centenary of the 1916 Rebellion come to a close, it was fitting that one of those fallen soldiers from that bloody period in our history was remembered over the weekend.

On Saturday a commemorative plaque was unveiled at the resting place of the late John (Jack) O'Shea in Knocktopher Cemetery.

It commemorated the part he played in the fight for Ireland’s Freedom.

He was one of seven men from Kilkenny interned in Frongoch Internment Camp, Wales.

He received the 1916 medal and it was proudly displayed in the window of Forde’s shop in Ballyhaunis, Co Mayo where he lived at the time. In 1915, Jack went to Dublin to join his brother Mick, who had a small shop in the South Circular Road area.

He got a job as porter in Baggot Street Hospital. Not long after he joined the Irish Volunteers. On Easter Saturday he received a mobilisation order to attend the following day at Blackhall Place.

On Easter Sunday, the mobilisation was cancelled. He returned to work in Baggot Street Hospital and was on duty on Easter Monday when a call came through to prepare for receiving 20 wounded British soldiers.

He knew then that the Rising had begun. He left work, gathered his equipment and made his way to join his unit at Blackhall Place.

He was imprisoned in Richmond Barracks and transferred to Stafford Jail on May 8. Then he was interned in Frongoch until his release in August 1916.

Kilkenny 1916 Historian Jim Maher spoke at the commemoration for Jack O’Shea on Saturday.

The family lived in Ballyhaunis, Co. Mayo and later moved to England. Jack died on 7th June, 1973 and is buried in the family plot in Knocktopher cemetery.