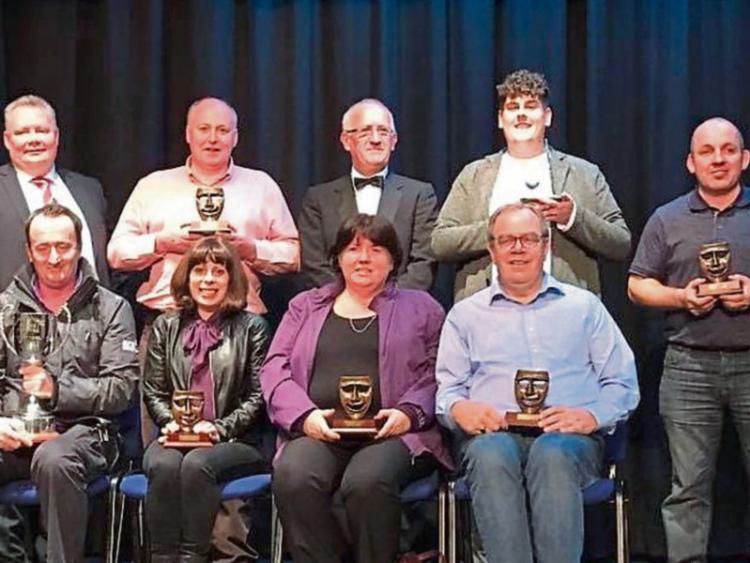 There were three wonderful nights of drama in Goresbridge over the Bank Holiday weekend in Ionad Dara.

A total of nine visiting theatre groups competed over the three nights in two sections of competition under the watchful eye of Adjudicator Paul Brennan.

This is the seventh One Act Drama Festival to be held in Goresbridge and was hosted by Kilcumney Players under the auspices of the Drama League of Ireland(DLI). Connolly’s Red Mills were the Main Sponsors of Goresbridge Drama Festival.

The festival was also supported by Goresbridge Credit Union and Donohoe’s Horse Sales, Goresbridge while the Friends of the Festival Programme was a great success also.

The Moat Theatre from Naas, Co. Kildare won the Open Section with Plaza Suite - A Visitor from Hollywood by Neil Simon.

This was was a really strong production with tremendous pace and energy from actors Sarah Gallagher and Conor O’Connell.

George Hogan was awarded Best Actor for his role in this production. The other groups in the Open Section were Square One from Bray, An Nuadha from Maynooth and Fr. Matthew Players from New Inn, Co. Tipperary.

The Confined Section had 4 participating groups and was won by Blue Hat Productions from Whitechurch, Cork for their production of Two by Jim Cartwright.

This was a very strong play with Sean Kelliher and Claire Kelliher playing multiple parts to great effect. This again was an extremely good presentation. Second place in the Confined section went to New Ross Drama Workshop with Interior Designs by Jimmy Chinn. Martina Kavanagh received an Adjudicator’s award for her role as Amy.

Camross Drama Group and Coolgreany Drama Group, both from Co. Wexford, also competed in this section.

There are 24 One Act Festivals around the 32 counties of Ireland in October/November. Groups are allowed to compete in 5 festivals and the 6 top scoring groups in each section will go on to compete in the All Ireland Finals in early December.

The Finals this year will take place in the Mill Theatre, Dundrum, Co. Dublin when Tom Byrne will adjudicate.