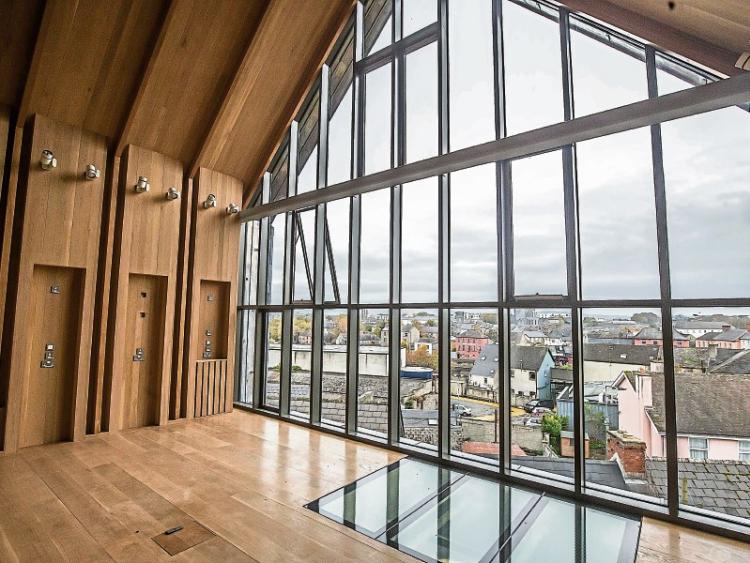 Following a sneak preview of what was St Mary's Church and Graveyard off High Street, Kilkenny, it's great to report that the new Medieval Mile Museum will become a Mecca for tourists and anybody interested in history, the Normans and Kilkenny's rich and varied past - Not to mention those with a liking for skeletons and high crosses.

It will open to the public next March/April and on Friday, I was invited into this incredible space full of antiquities and stories with an authenticity which will be brought to life by inter-active maps and visual aids.

The transformation is breathtaking from an old, decaying, almost disused de-consecrated church and garden which was used as a drinking den into a magical place where history is brought to life.

The main area will be used during the upcoming Yulefest and when you enter, you are reminded of the grandeur of the former church, abbey - Home of the Freemasons in Kilkenny and where the "Tudor Tiger" merchants of Kilkenny worshipped and were buried in the 16th century.

The workmanship and the attention to detail by project liaison architect, Evelyn Graham and her team is breathtaking.

The names of the Rothes, Shees and Langtons fill the air as you pass by their incredible funerary monuments.

And you are naturally drawn to the Celtic Crosses which are exact replicas of the Ahenny High Crosses.

These were molded and produced in 1906 and just a few years ago were made earthquake proof before they toured Japan.

It's as if they belong there, forming part of the fabric of the place.

However, the jewel in the crown of the museum must be the Kilkenny Room looking out on the city with John's bridge almost in front of you to the right and Green's Bridge to your left.

And how appropriate that an extract of a poem by the late Michael Massey entitled, "Between The Bridges" will be permanently placed on a bench in the room.

This temperature controlled space will house the city charters, many priceless artifacts and the ceremonial mace and sword of the Corporation.

And pride of place, and in it's own area will be the Liber Primus - the great book of Kilkenny.

She was there with her boss, Ciaran Conroy, the recently appointed CEO of the Kilkenny Civic Trust who in a short time has brought about such great change and has innovative plans for St Mary's, Butler House and the rest of the places within his portfolio.

However, the focus rarely switches from Evelyn Graham whose dedication to this incredible space is incredible.

She has immersed herself in every facet of St Mary's and it looks set to rival Kilkenny Castle as a visitor attraction.

And when the public interest in the place was sparked by the discovery of the skeletons at the entrance to St Mary's this summer, she reacted by having plans made to have them placed in a display case to become part of the story of St Mary's.

The Bell Tower has been restored with access to the first floor by a metal spiral staircase and by ladder to the top.

The main space, the nave of the old church (complete with underground heating), will have an inter-active map table dedicated to the story of St Mary's Church and graveyard.

The Museum experience will take you outside and under the Kilkenny Room where more funerary monuments await you.......and the grounds......