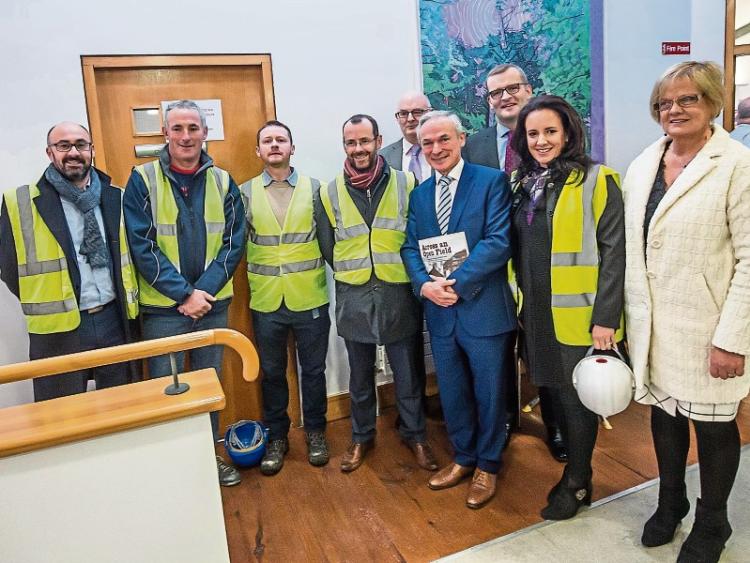 Minster for Education and Skills, Richard Burton visited Kilkenny Education Centre (KEC) on Friday to open an extension there.

On arrival he was greeted by the 60 strong Gaelscoil Osraí choir with two songs.

The Minister also launched a children’s publication about the Decade of Commemoration, involving Lisnafunchin NS, Castlecomer, and nine other primary schools both North and South of the border.

The book is a collaborative initiative between ten schools in the South and North of Ireland. What is particularly striking and exciting about the publication is that the writing has all be carried out by the children. In the telling of history from a child’s perspective there are many historical treasures and pieces of historical information that illuminate the book.

Speaking at the launch, Paul Fields, Director of Kilkenny Educatione Centre, said , “When we think of the life in Ireland over the past 100 years, there can be a tendency to focus on the fighting of the 1916 Easter Rising, the War of Independence, and the Treaty. There are many rich historical insights offered in the publication about Kilmainham Gaol, the GPO and the people involved in the various roles of engagement and support.”

Eithne McKenna, Chairperson of Kilkenny Education Centre, praised the students for their involvement in this project, and said the book, Across an Open Field, demonstrated many nuggets, all written from a local history perspective. Their historical accounts, offer great insights, but by collecting the stories of the past from ten groups in primary schools we have a much broader understanding of life over the past one hundred years.

Minister Bruton praised the children from Lisnafunchin NS, Castlecomer, for their interest in the project. He sad the epublication demonstrates the commonality, humanity and concerns of our nation, all written and drawn by children. “This book offers a platform for historical discussion about our nation, our people, and how our children understand its evolution, emergence and identity.

“The publication offers a rich tapestry of history, written from the eyes, ears and imagination of children.

“It reminds us how life at the time was full of conflict, and how the EU took on a role in bringing peace,” he said.

He then officially opened the school extension.