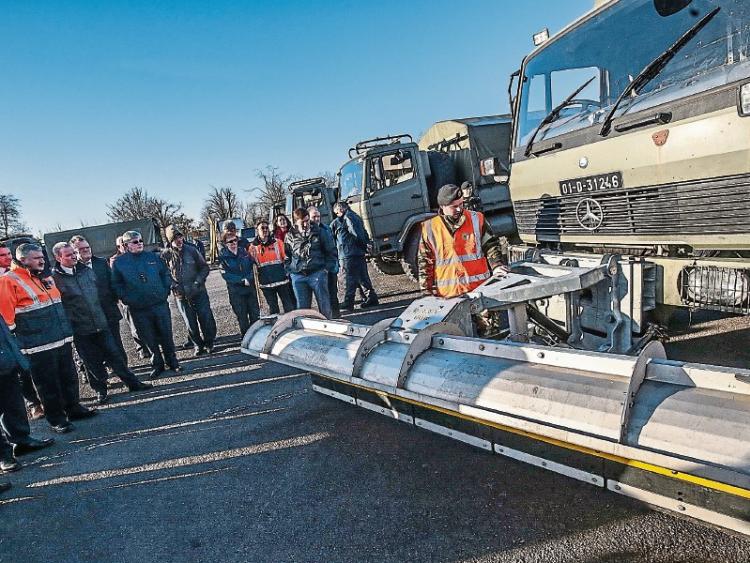 A demonstration of a snow plough for local councillors and emergency services at the James Stephens Barracks.

A number of local councillors have said that rural schools should be made a special case during episodes of cold weather which render roads treacherous.

At a recent meeting of Kilkenny County Council, director of services Tim Butler briefed the members on the winter maintenance programme. Road temperatures are monitored on a daily basis, and salted if required. Around 425km of road network is treated, as Priority 1 and 2 routes.

“A number of roads were added last year, and they have been retained,” said Mr Butler, adding that people should not take any risks on a road just because they think it has been salted.

Priority 3 routes are treated where possible in times of severe weather, in consultation with area engineers.

Howver, Cllr Maurice Shortall has said that a special case should be made for areas such as north-east Kilkenny, which has a lot of steep slopes and hills, to allow people to travel safely to doctors, shops, Mass and so on. He is particularly worried about rural schools.

“We're going to have to look at a strategy for our schools with a view to including some of them in the winter programme,” he said.

The Labour Party councillor wants such roads to be classed as Priority 3 at a minimum.

At the November meeting, he found support from Cllr Michael Doyle (FG).

“The Rower National School is on a huge hill from the New Ross side,”he said.

“In cold weather, it is nigh-on impossible to navigate it.”

Cllr David Kennedy (SF) also wanted a gritter for some dangerous backroads, and said that sand should be stockpiled in rural areas. Cllr Pat Dunphy (FG) welcomed the plan.

“But i do think there shold be some provision for areas we mightn't know about,” said the Fine Gael councillor.

“There are other areas that are going to come under pressure a hill, or a school.”

Responding to queries about adding more routes, Mr Butler informed the members that the council was operating four trucks, all of which were already currently working at full capacity.

“They are large trucks — if we are to ask them to go up and get a school, they are probably also going to have to go on another three or four miles to turn around. That will delay everything else further.

“Some of the schools are so isolated that to get a vehicle to all of the schools in need would take a considerable time. It's not like they're all in the one area.”

Mr Butler also said he did not have the additional costings of including all the Priority Three routes in the county, but that for the Piltown Municipal District alone it would be an extra €100,000, and so it would roughly be looking at this figure multiplied by three.

“We all want to do more but a high proportion of our roads are gritted,” he said.