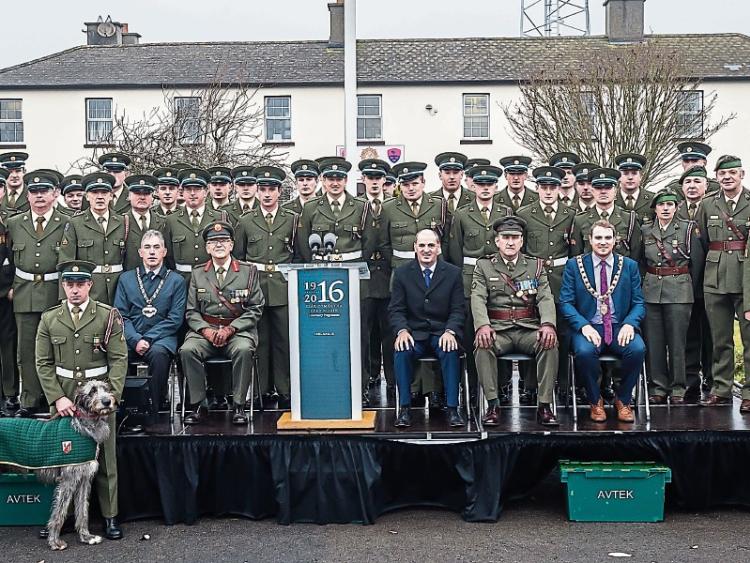 Among those local soldiers  heavily involved in centenary events was CS Pat O' Neill from Thomastown. CS O' Neill was one of those Defence Forces members who delivered the Tri-colour flag to schools in the Thomastown area, and took questions from students.

CS O' Neill was also involved in representing the 3rd Infantry Battalion in marching outside the GPO as part of celebrations commemorating the Rising on Easter Sunday, which was  also his birthday.

“It was a great experience,” he said.

“It's a huge privilege and an honour to get this medal.”

Speaking at the barracks yesterday, Minister of State Paul Kehoe congratulated the Defence Forces  on their achievements, and presented each with the medal.

“The members of Óglaigh na hÉireann have delivered exceptional service across each of the seven strands of the Ireland 2016 programme,” he said.

“They have played an essential role in our national commemorations whether at the Commemoration at the GPO and the Parade on Easter Sunday, the ceremonies to mark the execution of the Leaders of the Rising or the formal delivery, to all primary schools in the State, of our National Flag and a copy of the Proclamation.”

Speaking in relation to the medal, he said it was a fitting tribute and thank you from the Government, on behalf of the people of Ireland.

“I hope that the members of the Defence Forces who continue to serve or who have served during this centenary year will wear this medal with pride and in doing so accept the gratitude of the Government and the Irish people for their dedication to duty during this commemorative year,” he said.