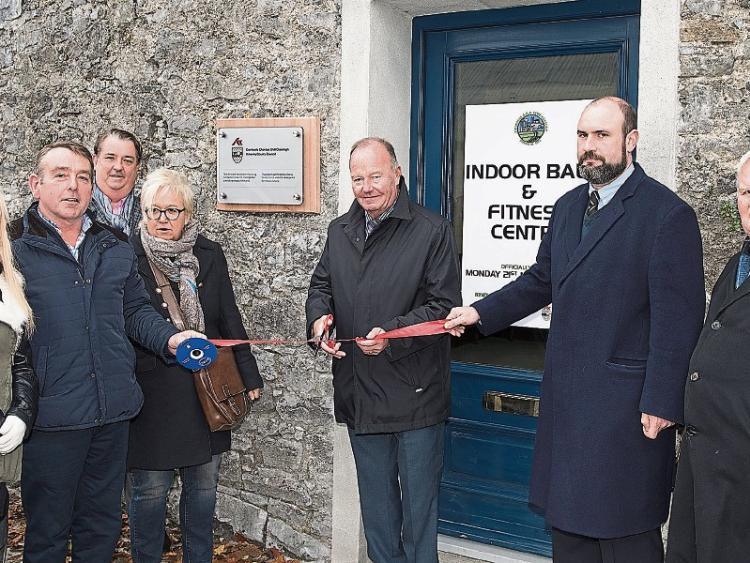 As you turn down Mill Road in Urlingford, there is a fine old building standing on the right hand side some 30 metres from Main Street.

The building began life as a brewery which is closed this many a year. In the early part of the last century, it was converted into a handball alley and the 1926 All-Ireland Softball Doubles final was reputed to have been played here when defending champions John Norton and Tommy Beehan of Urlingford and Kilkenny lost the title they had won the year before.

A further renovation was done in the 1970s but the alley remained a cold and unwelcoming enough place!

The single door in the wall now brings you into a very different place. In the early 2000s, a new back wall was put in to make the ball alley a more regular 40 x 20 size and this left a fine space towards the back of the building. Emeralds GAA Club linked up with the Mill Family Resource Centre in Urlingford and a plan was put in place to bring this fine building back into better use for the community. With the help of Kilkenny County Council and their Local Amenities’ Grants, the two organisations set about rejuvenating the building and now a fine new facility exists with a well-appointed ball alley and a fitness centre. The building was re-roofed and secured from damp. The Ball Alley was cleaned, repaired and repainted.

In the space to the back of the building, a total refit was completed. A new upstairs was added with a fine gym and fitness centre while underneath new changing facilities and toilets were installed. At the end of six months hard work, the new facility was ready for use.

Today, the Mill Family Resource Centre has use of the building during the day and their many groups make good use of the facilities throughout the week, with the ball alley providing a good space for many activities.

The Emeralds members have a fine gym and alley facility, especially for the off-season while people in the locality can join as fitness centre members and make use of the facilities also. An old building has come back to life for the benefit of all in the local community.

On Monday 21st November, the building was officially opened. Canon Lar Dunphy blessed the new facility and Councillor Michael McCarthy and Lindsey Butler of Kilkenny County Council cut the ribbon to open the doors to the people of Urlingford and the surrounding area.

Tom Phelan, Chairman of Emeralds GAA Club gave a short address to those assembled. Tom thanked all involved and noted that great credit is due to Sue Cox Director of the Mill Family Centre and Richie Norton (Secretary) and Thomas Kavanagh (Treasurer) of the Emeralds GAA Club who led the project.

Thanks were also given to Lindsey Butler, Senior Community Development Officer of Kilkenny Co Co for all her help and assistance with the project and to Councillor Mick McCarthy who provided lots of help and advice to the group.