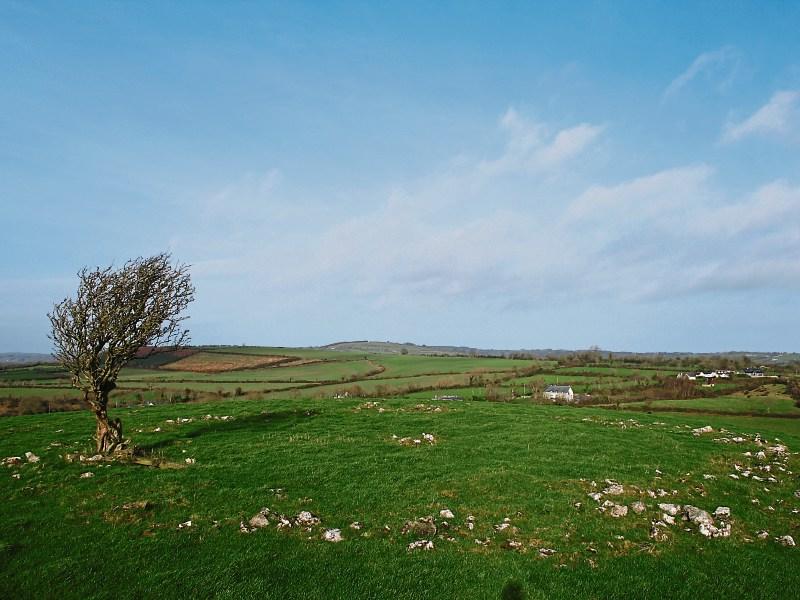 A major archaeological research project has brought to light tantalising new evidence that the Romans built temples where offerings were made to the Gods a few miles from the city over 1500 years ago.

It adds to the increasing amount of evidence that Roman communities and their descendants were living in Kilkenny from the first century BC onwards and there is a major concentration of Roman artefacts along the river Nore to the south of the city, including a first century AD Roman burial in a glass cinerary urn at Stoneyford.

And it turns out that drinking at funerals is not a common thing.

firstly, geophysical surveys on Freestone Hill, Clara on the Carroll family farm, by Cóilín Ó Drisceoil (Kilkenny Archaeology), the Römisch-Germanische Kommission and Ireland's foremost authority on the Romans, Dr Jacqueline Cahill Wilson, have led to the discovery of the shrines.

They are located just outside the prehistoric hillfort defences and are of international significance, changing completely our perception of Roman links with Ireland.

One is a square, probably ditched, structure with an attached enclosure and the other is a remarkable square post-structure.

A third shrine was previously excavated (though not identified as such at the time) in 1948-9 by the German archaeologist Gerard Bersu.

It was constructed at the summit of the hillfort and is dated to the fourth century AD by a coin of Constantine II (AD 337-340) and sherds of Romano-British pottery. This was a large ‘heart-shaped’ shrine, 36.5m x 30m, defined by 2.5m thick drystone walls - robbed down to their foundation level - which may have supported a timber structure. Inside the shrine human burials were placed in pits and the bones of horses, dogs and oxen were also placed as offerings.

Other offerings included various personal and domestic objects such as toilet implements, fragments of penannular bracelets, rings, a blue-glass bracelet fragment, a gaming-piece, a Constantine II coin (AD 337-40) and sherds of Late Roman drinking vessels. The possibility of these vessels and the human burials being contemporary raises the possibility that drinking at funerals has a long history in Ireland.

Freestone Hill is unique in Ireland but its shrines have much in common with Romano-British temples that were built in the fourth century AD in Wales and the west of England.

There is growing evidence that Roman communities and their descendants were living in Kilkenny from the first century BC onwards and there is a major concentration of Roman artefacts along the river Nore to the south of the city, including a first century AD Roman burial in a glass cinerary urn at Stoneyford.

The team are hoping to carry out archaeological excavations on the Roman shrines in the near future. Two publications by Dr Jacqueline Cahill Wilson and Cóilín Ó'Drisceoil on the work on Freestone Hill and the Romans in Kilkenny have been included in a recent book 'Above and Below' (published by Transport Infrastructure Ireland).