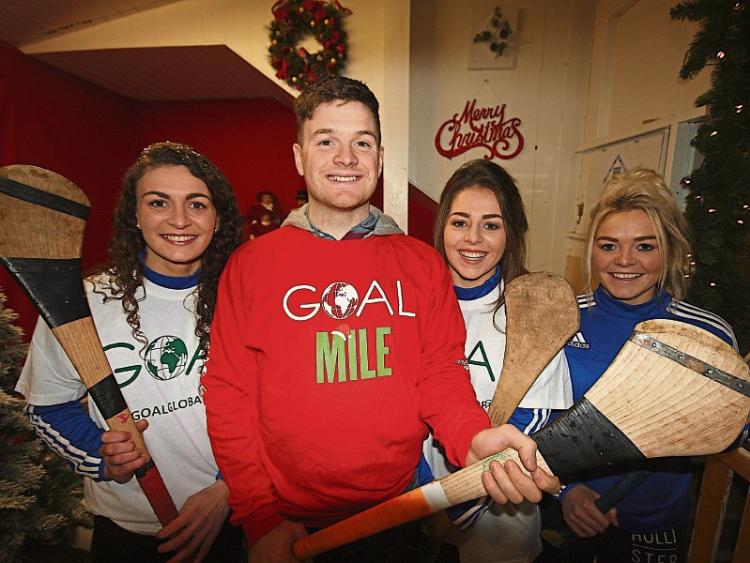 One of Kilkenny’s brightest and best GAA families helped launch the annual Thomastown GOAL Mile, which this year is celebrating its 10th anniversary

Kilkenny hurling star, John Joe Farrell, was joined by his All-Ireland-winning senior camogie sisters, Shelly and Meg, to help Natalia Caulfield launch the 10th Thomastown Mile, which this year will take place at Market Street on Christmas Day at 12pm.

Not only that, but Natalia and her fellow organisers will be hoping to break the magic €10,000 figure this Christmas for total funds raised since they staged their first Mile in 2007.

Thanks to the generous support of participants and supporters from Thomastown and surrounding areas over the past nine years, the Mile has helped raise a whopping €9,073 for GOAL’s projects overseas.

More than 120 venues across the country will play host to the popular annual fundraiser over the festive period this year.

Now in its 35th year, the GOAL Mile is held in villages, towns and cities all over Ireland every Christmas and is one of the country’s largest and longest-running annual fundraising events.

The concept is simple: people run or walk a Mile and contribute whatever they can afford to GOAL on the day.

Thanks to GOAL Mile organisers and participants, millions have been raised to support GOAL’s work in the developing world since the first Mile was staged in 1982.

For more information or to pick up a sponsorship card, please contact the local organiser, ring GOAL on 01-2809779, or visit www.goalglobal.org.