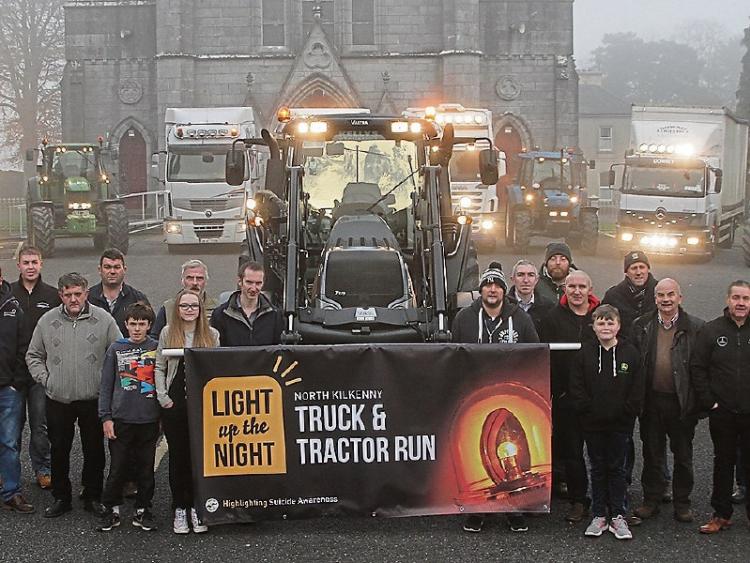 LIGHT UP THE NIGHT

A committed and concerned group of community activists have come together to “Light Up The Night” on New Years Eve.

North Kilkenny Truck & Tractor Run Group under the stewardship of Freddie Farrell, Byrnesgrove plan to literally light up two separate routes simultaneously with a united cause to raise awareness on suicide, a cross which has sadly knocked on so many doors in our area.

Special thanks to John and Marie Holland, The Square, Ballyragegt who have kindly agreed to facilitate space on their premises for Registration from 2.30 p.m.

An army of stewards and volunteers will be on hand at every junction to ensure safety of all vehicles on the various roads. Flashing Beacons on all vehicles is mandatory also High Visibility vest/coats on all drivers / passengers.

Trish Finegan and Rory Connellan of Lifeline Kilkenny met with the North Kilkenny Truck & Tractor Run Committee in the Canon Malone Hall, Ballyragget. Lifeline Kilkenny is the steering committee tasked with overseeing the implementation of Our Community: Our Conversation, Kilkenny County’s Action Plan on Mental Health. They explained that the plan came about through concern over the number of young men in Kilkenny taking their lives in 2012. The plan was formulated through a number of consultative meetings held in Kilkenny and all organisations both voluntary, state and community are involved in the actions. The plan was used by the National Suicide Prevention Office as a template for each county in their new national plan ‘Connecting For Life’. While Kilkenny has a plan of action that is being actively implemented, Rory and Trish felt that there was something missing in the national strategy. Perhaps this new approach from the grassroots upwards, communication between all organisations involved in improving our mental health and dealing with those bereaved is the missing link that will help to reduce the numbers who die by suicide each year. “It is also important”, Trish Finegan said, “to encourage people from childhood to look after their mental health. That looking after your mental health it is as important as looking after your physical health”. They were greatly encouraged to see a community group made up entirely of men not just talking about suicide but actively doing something to raise awareness in their community of the supports that are available to those who need it.