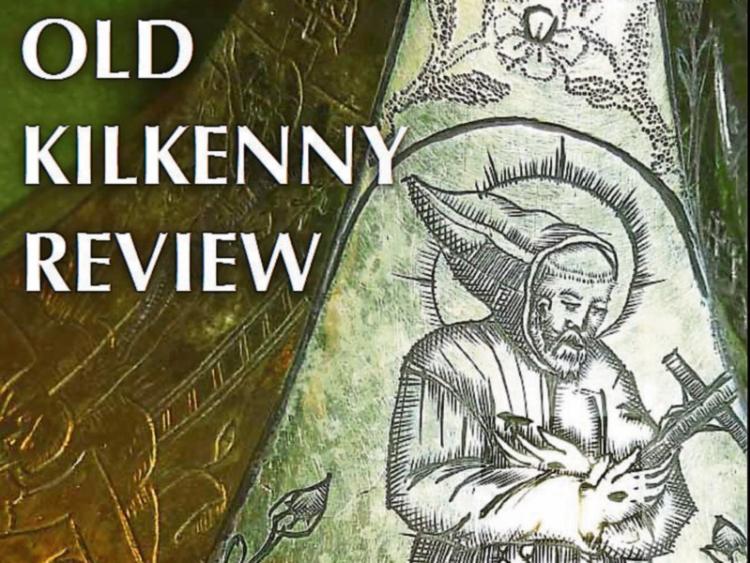 This year's journal of the Kilkenny Archaeological Society, the Old Kilkenny Review, is a bumper edition, full of great scholarship reflecting the wealth of the county's history and archaeology.

Edited by Cóilín Ó Drisceoil, the journal opens with Gerry O'Keefe's monumental study of the history and archaeology of St Francis Abbey, Kilkenny City. Gerry has produced a magnificent analysis of the worlds in which the Franciscans lived and worked, and he has for the very first time worked out the topography and layout of their precinct at St Francis Abbey.

His study is timely considering the major developments that are about to take place on the former precinct.

John Bradley's legacy to the study of the medieval Ireland was celebrated in a Kilkenny Archaeological Society/Royal Society of Antiquaries conference in October 2016 and the keynote address by Dr Kieran O'Conor entitled 'John Bradley's research on Anglo-Norman Ireland' is published as the second paper in the review. The paper describes the staggering depth and breadth of John's research on both the medieval town and countryside.

Ironworking in medieval Kilkenny is the next port of call, with an insightful paper by Paul Rondelez that draws together for the first time the results of archaeological excavations, scientific analysis of metalworking waste and historical records to reconstruct the ironworking industry in the medieval city. Interestingly, Paul has identified the communally-owned town forge as having been located where the near communally-owned AIB on High street now stands.

The next paper is by Niall O’Brien and he presents extracts relating to Jerpoint Abbey in the Calendar of Papal Registers and reminds us how interconnected the European religious world was in the Middle Ages.

Kilkenny's stock of early modern housing is unique in Ireland and important research by Gertie Keane has identified as many as thirty-two of these buildings still surviving, to varying degrees of intactness, in the modern city. Her paper reviews their history, architecture and archaeology, before examining their place and meaning in the urban landscape.

In 1622, Bishop Jonas Wheeler compiled a financial account of the diocese of Ossory and using the old adage 'follow the money' Kevin Higgins has analysed the manuscript to figure out who the beneficiaries of tithe income were at the time. Not surprisingly, it was the wealthiest and most powerful in society that got the bulk of the money.

Though much has been written over the years about the history and architecture of Woodstock house, its significant archaeology has not been examined before. James Byrne redresses this by identifying material remains of the designed landscape and other elements of the estate and sets out an agenda for their future research.

In August 1852, the 44 years old deaf-mute Thomas Kelly died in Callan poorhouse, ostensibly as a result of negligence. The 'blame-game' became heavily politicised and sectarian and the incident caused uproar in the town of Callan. Using primary records of the incident and inquest Myra D. Kavanagh expertly provides an account of events.

Tony Patterson has contributed more than most to the pages of the Old Kilkenny Review over the years and his focus this year is on one of the main players in the Easter Rising, but one about whom little is heard, the Kilkenny-based JJ 'Ginger' O'Connell. Tony's article recounts the extraordinary amount of travelling that was undertaken, most of it on bike, by Ginger O'Connell before and during the uprising.

Another stalwart of the journal is Michael O'Dwyer and his article 'The Civil War in county Kilkenny: compensation claims' uses original records to presents the context for a series of compensation claims that were made following the destruction caused by the Irish Civil War.

Private John Daly, a native of Hugginstown, joined the 5th Battalion of the Royal Irish Regiment in August 1914 and was killed in action in Gallipoli just a year later, in August 1915. Alice Mc Dermott chronicles his life and tragic death in the Great War.

The final paper in this year's Old Kilkenny Review is by Louis Feeley, who was clerk of works at Rothe House during its famous restoration in the early 1960s. Louis's contribution describes the restoration work that was undertaken in detail and also the many practical challenges that confronted the team that worked on the project, one of which was the immense task of constructing the new roof structure in the first house.

The journal ends with book reviews and the proceedings of the society in 2016.

Old Kilkenny Review is available to purchase at Rothe House and bookshops for €15.