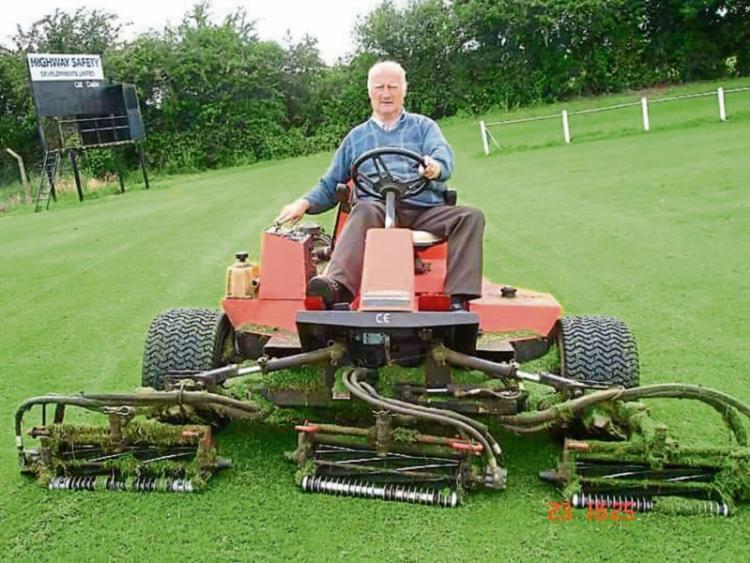 Kevin Kennedy passed away on November 8 in hospital after several weeks of serious illness involving treatment in the ICU of James’ Hospital, as well as Dr. Brennan and his team locally, writes David Gallagher.

He is survived by his loving wife Bridget, daughter Ann, sons Michael, David and John and their children, his grandchildren.

Kevin got, as he predicted himself, a huge send-off. He was waked in Johnston’s funeral home in Kilkenny before being brought home to Ballyhale where he was received into St. Martin of Tours Church in Ballyhale. His funeral was held there the next day and he was buried in the new cemetery. Family and close friends had a meal in Carroll’s Hotel, Knocktopher before returning to Ballyhale and Andy’s later.

As often happens to a person with serious illnesses it was not the long term illnesses that got him in the end but a new one, for which his body was too weak to withstand. In the weeks before his death he had been in and out to hospital. When the big double header was held in his beloved field in Ballyhale he insisted on being there and insisted on manning the gate as normal. He was there that day, in his jumper with just a brolly for rain protection and while he did not ‘collect the gate’ as actively as he would have in the past he did make sure to say hello to absolutely everyone who passed in the gate that day. While the Shamrocks Club has many people who could be regarded as the ‘public face’ of the Club Kevin could certainly be counted in that number. He was immensely proud of ‘his’ field and the work that went on there. Even though in later years he received a lot of help when he was in the whole of his health he did an awful lot of it by himself. It often occurred to me that over the years players took it very much for granted that when they arrived the gates were open, the dressing rooms were open, the lights were on and the showers were on, the grass was cut, the nets up and the flags in place. All that was Kevin, regardless of whether it was a senior game or an under 10’s. Even when he started to slow down he made his way even earlier to the field, stopping at the Garda station for a rest on the way.

If Carlsberg made Lotto ticket salesmen they would probably make Kevin Kennedy. It is doubtful that anybody sold more Shamrocks/Parish lotto tickets than he did. He had his own special way of producing the tickets just at the right moment. “Will ya buy a ticket off me” he’d say, handing you the ticket book and a pen!

He was immensely proud of Ballyhale. In years past he represented the Shamrocks at Southern Board meeting and at the County Convention. Kevin didn’t drive and this was back in the time that a trip to Piltown or Mooncoin for a Southern Board meeting was a big deal – and a day out. He often recounted the days when the South would come to Ballyhale – for AGM’s, Championship matches, tournaments and Conventions. He was very proud that Ballyhale was at the heart of all that activity.

As a parent Kevin was a product of his age , generation and upbringing. One of his son’s told me he wasn’t a ‘cuddly’ dad. Nevertheless he was a good father and it was clear just how much love all of his now grown-up children had for him. Where he came into his own though was with his grandchildren. Wherever they lived Vicar’s Lane was always a second home to Ann’s lads and they were fed and looked after there as much as at home. There are probably very few families in Ballyhale who stay at home or come home as often as the Kennedy’s, and as time went on with grandchildren in-tow. While David and John’s lads are still too young Kevin was immensely proud of the achievements of Ann’s lads – whether it was Hurling, Football, Soccer or School. He talked about them to others more than those lads will ever know or realise.

Kevin had a keen interest in politics and I was privileged to see him perform the “President Kennedy” speech several times over the years. He may even have been related! He was an active member of Fianna Fail. I can recall speaking to him just before the council elections in which his son David ran for Sinn Fein. Kevin was genuinely torn as to who he should vote for. He was cute enough though not to give away his final decision on his first preference. Regardless of whether he actually voted for David (and to be fair, who could begrudge him) I know that he was immensely proud that one of his sons is a County Councillor. He was often heard to ask ‘How is my lad getting on in there?’ to people who might know.

He was also very proud of Ann, Michael and John and was very proud that his son John went back to College to obtain a degree. Kevin missed a few events this year in which family members participated but he would have been told about them and known they were going on.

As a neighbour Kevin wasn’t the type you would borrow a step ladder or a wheel barrow from. Neither was he the type to ask you for one or to ask you to do anything for him. One thing he always did as a neighbour was to ask “How are you keeping?”. I always took this to be a genuine and sincere enquiry and not just a passing “hello”. There were times in Andy’s that Kevin might ask several times how you were keeping – and wait for your response. He was genuinely engaging you in conversation. In his final weeks Ann and her brothers told people that when Kevin woke he gave them a ‘wink’ and a smile. In the ICU it was as much as he could manage. I’ve no doubt that the wink and smile were a great comfort to his family. They will also remind his pals, mostly from Andy’s, of Kevin in high spirits, on a busy night or after a big match. He would wink and smile and then lob in a telling question to the group he was with – and then sit back and wait for the fireworks. He had great friends in the late Big Tommy Walsh, Bobby Aylward, The Shefflin family, Christy, Neddy and Andy O’Keeffe to mention just a few. Andy wrote out a small few stories to recount at his funeral which turned out to be several pages long!

A Months Mind Mass was held on 11 December in Ballyhale, followed by a Kennedy family get together. As this is their first Christmas without him we all know it will be hard on them and wish the family a happy and peaceful Christmas filled with fond memories of a husband, father and grandfather. His family posted a particular photo of him on a sunny day, sitting on the mower down in the field in one of his jumpers. It is how they would like Kevin to be remembered. I know his family won’t be the only ones to remember him fondly.