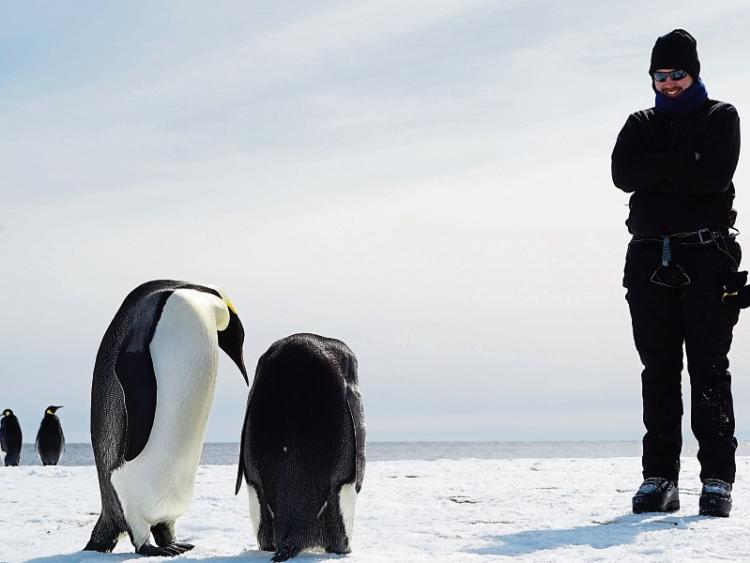 A Kilkenny man is part of a huge scientific research project on the ice shelf which is currently breaking off the Antarctic.

Damien Flood-Ryan is from Castlecomer and is a member of the crew of the British Antarctic Survey (BAS) who operate the Halley Research Station, located on an ice shelf floating in the Antarctic.

His duties are hugely varied as everyone has to pitch in because of the small number of the team, the cold and the need for everyone to do their part to ensure they survive and get the job done.

Damien's main responsibilities, along with the team, are to decommission the station, de-rig and transport it over 20 kilometres to a 'safe' zone on the floating ice.

“This meant towing the eight modules one-by-one (each weighing 200 tons to the new site, then reconstructing all of the modules, ready for the wintering team once he and his team leave in March.

Other tasks include constructing temporary camps, to house all the catering and communal area.

“We work approximately 65 hours a week but we also do have a lot of recreation,” he pointed out.

Far from being a desolate spot. he has experienced. Ice climbing visiting the Emperor penguins, driving snowmobiles, skiing, playing football and some regular indoor activities.

“March is the deadline for the project because of the sun. During the summer months (November, December, January) there is 24 hours of daylight and a steady temperature of around -10 degrees Celsius. The weather is far more suitable than the rest of the year. Where temperatures do drop down to -65 degrees Celsius.

“The planets course has always been changing ever before man. We are possibly contributing to that through pollution, but I do not believe it is a reversible process. The ice shelf breaking is not due to the Earth's temperature rising or anything like that. It is because the glaciers here are constantly expanding and eventually they crack and break, become an iceberg and melt.

“Rising the sea levels. However this means Antarctica is actually expanding due to the constant growth of the glaciers here,” he said.

Damien was working as a carpenter in London when he read about the vacancies for staff with BAS.

“I applied for the role of a carpenter/builder and I did some research on the reason for the relocation of the research station.

“This is because the research station is on the ice shelf and not the actual continent, and the ice shelf breaking is actually a regular occurrence over a period of time.

“This is the reason why the station was originally designed to be relocatable. After an interview stage and medical/dental checks I got the go ahead to join the summer team (a four month contract).

“I had to travel to Cambridge for my interview, and also travel to Derbyshire for training for the extreme environment of Antarctica. This training included; sea survival, CPR, how to give injections, applying stents to bone breaks and more. Once we got down here, via Cape town on the Ilyushin aircraft, we were introduced to the vastness of the continent and the research station itself.