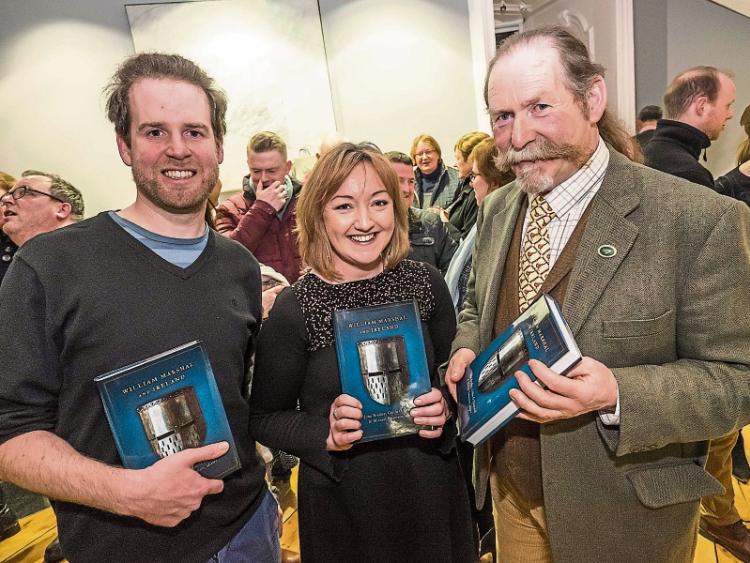 A new blockbuster book, launched on Friday night of last week, presents the man who built Kilkrnny Castle in a bold, new light.

How apt that the Parade Tower in the castle was the setting for the unveiling of “William Marshall and Ireland”.

Co-editor and imminent Kilkenny archaeologist, Coilin O'Drisceoil said the book, a collection of new essays, portrayed Marshal in a new light as a master strategist, a nation builder,

and economic heavyweight in a way hat differs from his well researched persona as the 'greatest knight that ever lived’ and a ‘flower of chivalry.

“And just as importantly the book shines a light on the important role of Isabel de Clare in developing and defending the lordship of Leinster,” Mr O'Drisceoil said.

“They were what we might call a medieval power couple, the Bill and Hilary

Clinton of their time,” he said.

He dedicated the launch of the book to three people; his late wife, Emma Devine, who was the chief organiser of the conference that spawned the book in 2008.

“And I would in particular like to extend a warm welcome tonight to Emma's parents Paula and Ken.”

He mentioned the late Billy Colfer, whose magnificent paper on the Marshal and county Wexford is included in the book which is must have for all lovers of Kilkenny and its past.

He finished with a few well chosen words on his now deceased co-editor John Bradley.

“The depth and range of his scholarship shines through in his paper on the Marshal charter to Kilkenny and is another reminder of the huge loss he was to Kilkenny and the study of medieval Ireland,” Mr O'Drisceoil said.

He thanked the essay writers David Crouch, Adrian Empey, Miriam Clyne and Daniel Tietzsch-Tyler for their research and enthusiasm for their task.

He was warm in his praise of co editor Michael Potterton who also spoke at the launch.

He thanked Martin Fanning, Anthony Tierney and the staff at Four Courts Press for publishing the book.

The book was launched by Con Manning of the OPW, a former president of Royal Society of Antiquaries of Ireland.

He carried out a peer review of the work and ended by saying the essays were well researched and had unearthed new and important information on Marshall,

MC for the evening was Mr Seamus Brennan, president of the Kilkenny Archaeological Society who declared that archaeologists should not tell jokes at nook launches after two howlers from earlier speakers.

He yearned the loss of John Bradley and noted that Coilin O'Drisceoil has taken over Bradley's mantle as Kilkenny's leading archaeologist.

He said the book was a hugely impressive undertaking and advised people to purchase it before it went out of print,

Before he left the podium, Coilin O'Drisceoil thanked the OPW, Anne Teehan and Maelle Champenois of the Parade Tower, Michael Dore for the refreshments and his family who were out in force to support him including his parents and his wife Liz and two young daughters.