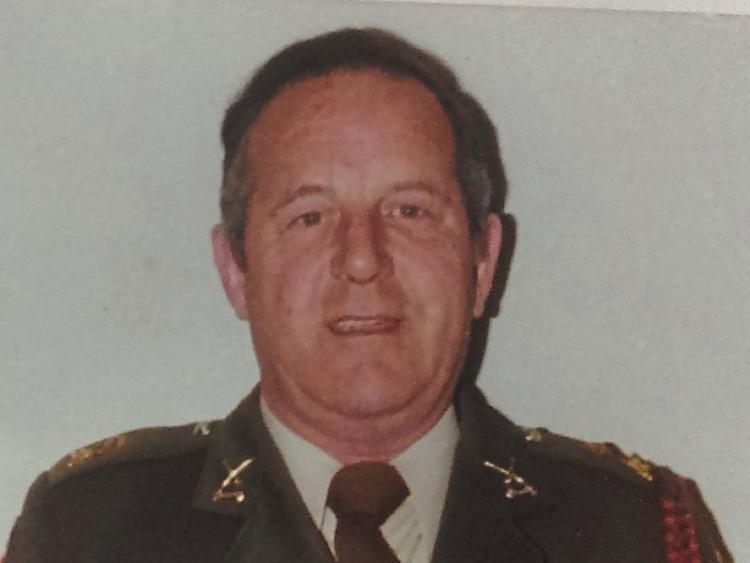 The late Danny Flood, Derdimus, Tennypark, Kilkenny who died last summer was a gentle giant, who served his country, his home county of Kildare and his adopted city of Kilkenny with great distinction.

A former commanding officer of James Stephens Military Barracks, Kilkenny, he played senior football for Kildare and served overseas several times on UN Peacekeeping operations and was a great supporter of many local charities.

He was a jovial, kind man who always saw the best in people and his funeral in August of last year, was huge, reflecting his stature and his popularity.

'A towering figure over six feet tall with a physique to match’ was how Danny flood was described when he played football for the Kildare senior team in the 1950s and '60s.

Danny was the son of Tom and Peg Flood born in Leinster Street, Athy in August 1934. He was the second youngest of six children.

He was a member of the Athlone Rugby team that won the Connaught Junior cup in 1959 and also played basketball to a high level.

his last appearance in a Kildare jersey was against Meath in Croke Park in June 1964.

In her eulogy at her father's funeral Mass, Deirdre Dyer, said her parents met when her father was on night duty on St Patrick's Day in 1958 when he heard that the there was a bottle of medicinal brandy on the maternity unite where her mother was on duty.

“Dad’s friend Tony Wall was with him, though Dad did not need encouragement, as they sweet talked their way into securing the bottle of medicinal brandy from Mum,” she said.

They married and went on to have six children, five boys and one girl.

Lt Col Flood retired from the army after 40 years of service.

He served in Athlone, Waterford and Kilkenny but also got to see life in Dundalk, Lebanon, Cyprus and Central America.

On retirement, he joined the Citizen Advice Centre in Kilkenny city as a volunteer and also the ONE (The Organisation of National Ex-Servicemen) and went on to hold various posts with ONE, like Director of Pensions and Company PRO.

“Memories of our dad as a family man are interesting. Growing up in Ireland in the 60s and 70s had its own challenges where children were seen and not heard but saying that it wasn’t all bad,” Deirdre said.

Sundays were great because that is the day we got our pocket money.

“Dad decided the fairest way was to give each of us the equivalent of 2p for every year old we were – so when I was 10 years old I qualified for grand total of 20p a week.

“It was amazing how many Jackie, Bunty, Beano and in Gar’s case Shoot magazines that we could buy when pooled our resources,” she recalled much to the delight of the congregation.

“We were also introduced to Fanta orange juice with Ice cream long before Knickerbocker glories were fashionable,” she said during the homily.

His first match for Kildare was on October 10, 1954 when Kildare defeated Wexford in a national football league game played in Ferns.

Thereafter Danny was an almost constant choice for the County Senior team, occupying the pivotal role of full back where his height, strength and fielding skills brought him many plaudits.

The line was: “Flood lasting the pace better than their colleagues.”

Kildare played Dublin before a record crowd in Croke Park on 18th May 1958 in the National League final.

His last time in a Kildare jersey was against Meath at Croke Park on June 7, 1964. After 10 years playing senior football for his county Danny retired from the county team.