Loreto Kilkenny: Technology and the implications to State Examinations 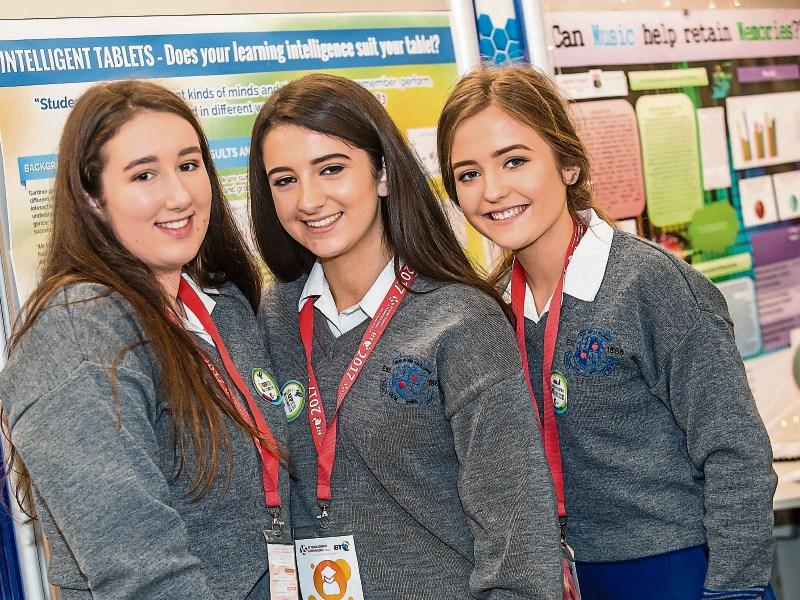 Lucy, Sophie and Anne of Loreto Secondary School at the BT Young Scientist which was held in the RDS

A project completed by Lucy Keane, Sophie Shine and Anne Holohan of Loreto Secondary School in the city investigated and then assessed the impact of the tablet on different learner types as they studied for State examinations.

It was highly commended by the judges at the BT Young Scientists' exhibition in Dublin last week and judges commented: "a well thought through which has wide implications for national education policy".

All humans possess nine different and students are broadly four types of learners - read/write, visual, kinaesthetic or audio. The research established learner types and investigated how the use of the tablet benefits different learner types. The girls explored the difference between learning by tablet and learning in the traditional way.

The three transition year students were helped by the fact that the current sixth years did not have tablets when they were preparing for their Junior Cert and the current fifth years were the first batch of pupils in the school, to do the Junior Cert with the help of the tablets. The project's authenticity was helped by the fact the girls had two similar groups on which to base their analysis and each group included all types of learners. The judges also noted their mixed methods approach - including in-depth interviews with experts in teaching and learning, focus groups and statistical analysis.

The girls were visited on their stand by Deputy John McGuinness who was extremely interested in the findings and after asking a number of questions brought the leader of the Fianna Fail party, Micheál Martin who is to raise the issue of suitability of tablets for different kinds of learners with the party's spokesman on education, Thomas Byrne TD.