Coláiste Pobail Osraí: Investigating pesticides on fruit and veg from around the world 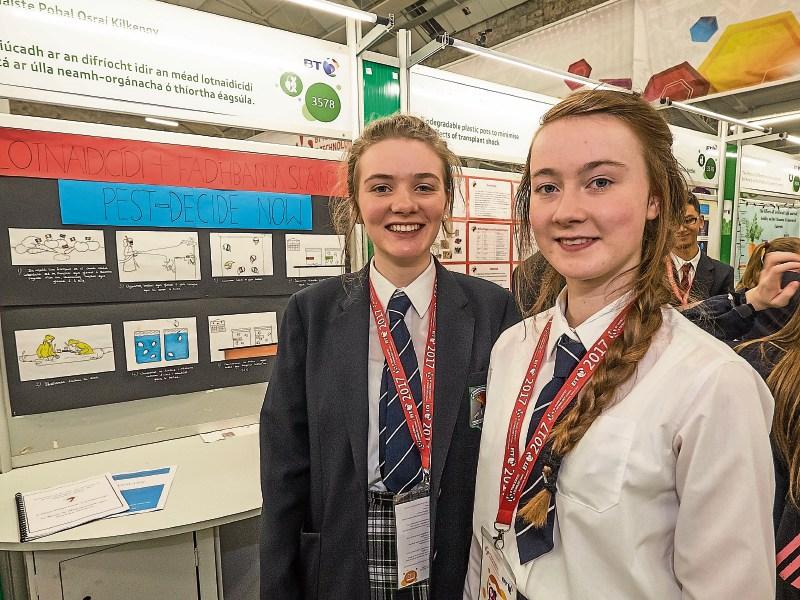 Roisín and Enya at the BT Young Scientist in the RDS

As Bearla: ‘Investigation into the amount of pesticides on fruit and vegetables from different countries’ in the intermediate category of the Biological sciences section of the BT Young Scientists Exhibition.

The project is based around pesticides on fruit and vegetables.

As we hear more and more every day about the benefits that are linked to an organic diet, the group wanted to see if paying the extra cost is really worth it. They researched pesticides and found that they can sometimes have many negative implications on human health. There have been many studies proving a connection between pesticides in diets and ADHD in children, cancer, and dementia. They investigated the varying amount of pesticides used by six countries on their fruit and vegetables.

To determine this difference, they used Daphnia. Daphnia are tiny crustaceans and are often used as bioindicators in ecological experiments.

After washing the produce, they put Daphnia living in the water from the washing. We got our results on the basis that the more Daphnia that died, the more pesticides that were on that fruit or vegetable.

They found that after washing organic produce no Daphnia died, compared to an average of 75% Daphnia dying in water from washing non-organic produce. These results show just how harmful these pesticides.

They were particularly startled by the fact that there were pesticides on all of the fruit and vegetables they tested, apart from the organic produce.