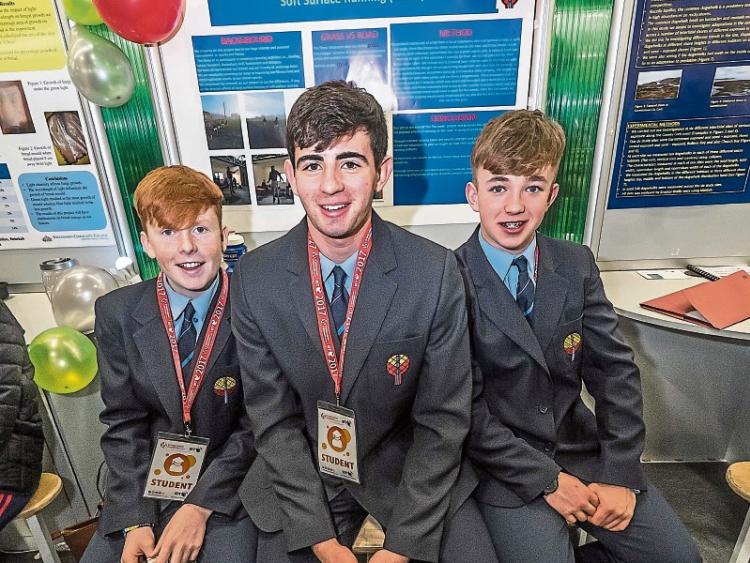 Conor, James and Jack at the BT Young Scientist

Under the supervision of teacher James Murphy, the trio of Conor McMahon, James Brennan, and Jack Buggy carefully researched their project and worked hard to find the conclusions. As Transition Year students, it was their first time to enter the exhibition.

With interest in jogging/running as a hobby and increased concern over the effects of impact on joints, tendons, and muscles, the boys set out to make sense of the science behind it all.

“We got six lads in our year to run twice a week for five minutes, as far as they could,” explains Jack.

The boys then measured the athletes 'power jump', improvements over time, and saw that those running on grass improved their jump more speedily.

“They are getting a good bit of interest in it,” teacher Mr. Murphy told the Kilkenny People last week.

“ There hasn't been a study carried out like that. They found that running on grass is better. It has got a lot to do with the flexibility of muscles.”

The lads worked tirelessly on the project to obtain the results allowing them to draw their conclusions. They thanked their science teacher Mr. Murphy who supported and encouraged them with their idea.

The group also paid special mention to Sean Kelly, a sports scientist in Carlow IT, who advised and assisted throughout the project.

As well as the scientific and technological curios on display last week, there was plenty more to keep all the students entertained when they weren't showcasing their wares to judges or mingling with the crowd.

“They are getting on very well — they're getting a good bit of attention,” Mr. Murhpy joked

“They've got pictures with everyone — Ryan Tubridy and the President.”