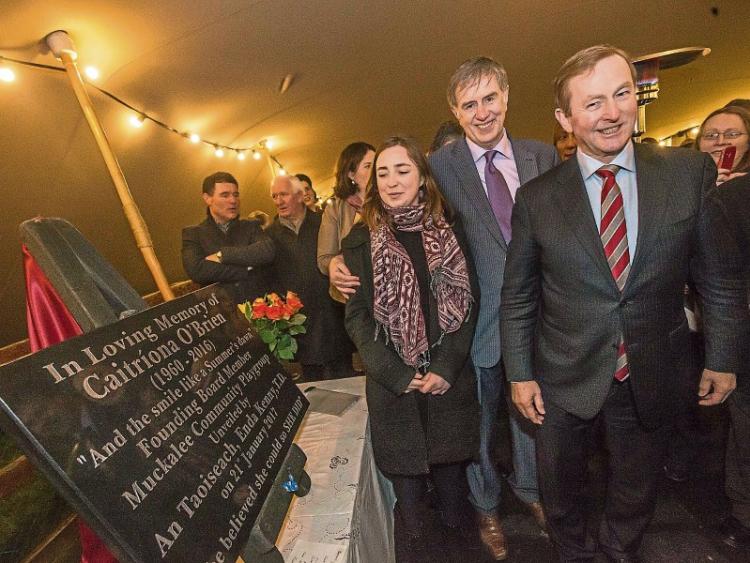 Turning to Noel O'Brien, husband of the late Caitriona Hayes-O'Brien on Saturday night, Sheila Brennan of the Muckalee play school, said that Noel should get some comfort knowing that the premises they were in, would stand as a testament to Caitriona's great spirit and vision.

That was one of the most emotional moments at the unveiling of a plaque to honour Caitriona at Muckalee play school where she had been chairperson and a driving force behind its construction ten years ago.

Taoiseach Enda Kenny who unveiled the plaque said he knew how special Caitriona was and added that it was a privilege to be present and to recognise the value of the contribution she made during her time as a teacher and as the chairperson of the board of the play school.

Caitriona's husband, Noel O'Brien said he had not intended speaking but after seeing the plaque the night before, he said he could “almost hear Caitriona saying Noel you'd better get up there and say a few words.”

“I was visiting Caitriona's grave and I could hear the sound of children playing in the play school and primary school through the trees.

“Over 400 children have passed through the doors here and it's testimony to the founding board which included Caitriona.

“Caitriona had a way of circumnavigating the word no” he explained.

“I would especially like to thank Taoiseach Enda Kenny from the bottom of my heart for joining us in this small parish of Muckalee to honour Caitriona,” he finished.

Speaking about her friend, Sheila Brennan said: “She was a lady of great vision. As a teacher she knew the value of education in promoting equality. As a working mother, she knew the importance of affordable and accessible childcare. She sought to promote links within the community and was able to harness the skills therein.

All of Caitriona's brothers and sisters, originally from Thomastown, Tipperary were present including John Hayes, structural engineer who made a huge contribution to the building of the preschool.

Speaking on behalf of the Hayes family, former Fine Gael TD, Tom Hayes spoke of the pride that the whole family felt that their sister was being honoured and had been such an integral part of the community and that words could not really capture their feelings and thanked the Taoiseach for making himself available.