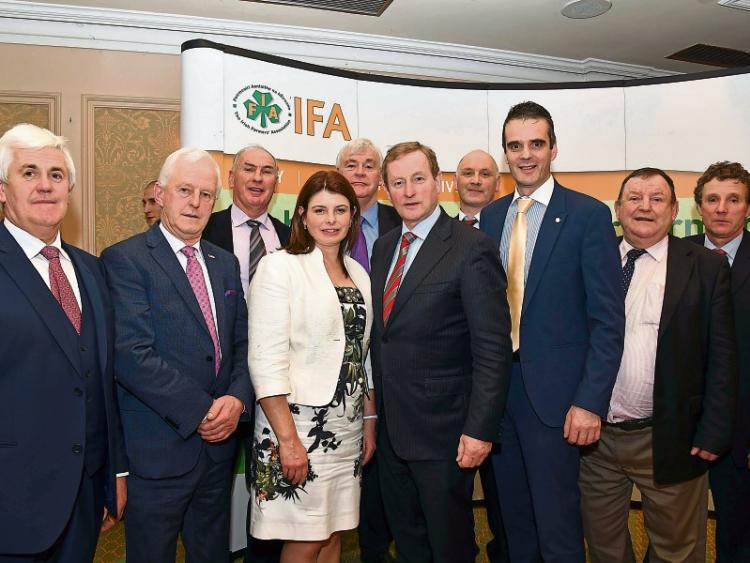 The men and women from Kilkenny who took part in the farm walk to Dublin in 1966 to seek negotiation rights for the National Farmers' Association on behalf of farmers were courageous people who helped to ensure a place at the bargaining table for all farmers and led to the recognition of what became the Irish Farmers' Association (IFA), writes Sean Keane.

Taoiseach, Enda Kenny also said it was a seminal moment in Irish agriculture and that it was absolutely important for us, as a people, to recognise the achievements.

He thanked each award recipient individually and all who received pieces of cut glass were delighted.

And as those brave men and women went up to receive their awards, word came that another great IFA man, Tim O' Neill, Gowran had passed away that evening.

IFA County Chairman, Johnny Bambrick pointed out that Tim had also taken part in the walk to Dublin and had been great supporter of the organisation.

He couldn't let the night pass without remembering another great IFA man, Jim Carrigan of Clara who had a life long commitment to the land.

And he also disclosed that regional chairman of the IFA for South Leinster, James Murphy, Inistioge had earlier that day, buried his mother-in-law, Peggy Ryan.

A minute's silence was observed as a mark of respect. Earlier, Joe Healy, president of the IFA told Mr Kenny in no uncertain terms the issues which the IFA would be campaigning for over the next number of months.

Chairman of the IFA in Kilkenny, Johnny Bambrick, set the tone at the start of the evening by alluding back to 1966 and recalling all those who had helped with the campaign including the late Michael Murphy of Murphy Motors in Glenmore who brought his lorries to Dublin to bring back the farmer's machinery after the historic protest. And it was fitting that his son, Dick and his wife Frances, who is continuing the thriving business in Glenroe, were present.

The night was a great success with everyone basking in the glow of the memory of what these people did to secure a future for farmers in this country.

Those who received awards were: Mrs Mary Fitzpatrick, Tinniscarthy, Freshford; a daughter of Jim Bergin - Jim sat on the steps outside Government buildings in '66.