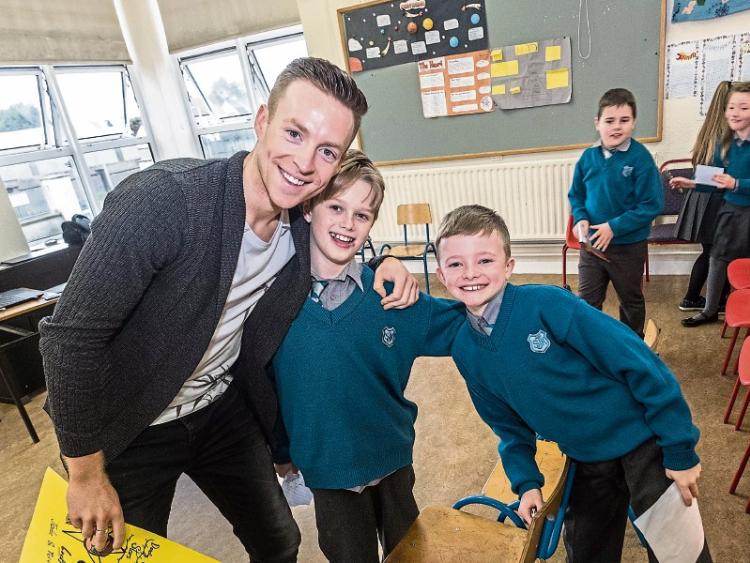 The youngsters at St John's Senior School were in for a special treat last Monday when former pupil and dancer with the stars, John Edward Nolan paid them a visit.

The Kilkenny man is one of a troupe of professional dancers participating in the hit TV series, Dancing with the Stars and his partner is popular RTE broadcaster, Teresa Mannion.

“I got a great reaction from the pupils, they were great, full of questions and support.

“They are big fans of the show and of Teresa and they were asking if she would come down as well so hopefully we can organise this,” he said. The pair received huge support from the voting public.

“We did the quickstep to Dolly Parton's Nine to Five and although we got harsh scores from the judges the public really got behind us.”

“This week we are doing the salsa and it has been great fun rehearsing. Hopefully the public will stay supporting us so that we can remain in the show,” he added.

The 27-year-old is originally from Nore Terrace on Maudlin Street and is now working in Dublin as a professional dancer and teacher. At three he was learning ballet, Irish dancing and set dancing. Three years later he took up ballroom and hasn't looked back.

The former CBS secondary school student has represented Ireland at World and European Championships and is Irish Champion in Ballroom and Showdance.

John Edward has worked as a full-time teacher in Ballroom and Latin for the past eight years and was head teacher in Xquisite Dance for five.