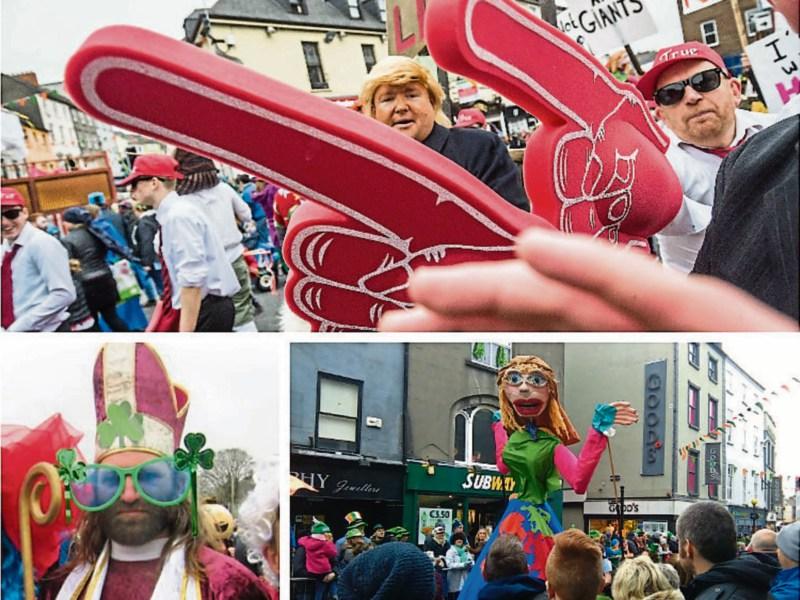 Admirers, critics, and even press photographers struggled to get up close and personal with the smug-looking ‘President Donald Trump’ who grinned imperiously from his seat in this afternoon’s St Patrick’s Day parade in Kilkenny City.

His band of sunglasses-wearing ‘Secret Service’ agents kept shenanigans to a minimum, and ensured there would be no repeat of the infamous ham-sandwich-with-brown-sauce-throwing incident of St Patrick’s Day 2012, in which local dignitaries were targeted by an unidentified marksman passing City Hall.

‘The Don’ can be glad he did not meet the bearded and ebullient St Patrick, who had earlier wound his way through the Marble City’s streets as part of the Watergate Theatre’s display.

The streets were thronged from before 1pm, and it was difficult to stray too far in a hurry such was the sheer number of people who turned out for a look at this year’s parade. Despite forecasts,  wet weather did not really materialise at lunchtime.

Tying in with the Jonathan Swift theme, ‘Growing Patch Captures Gulliver’ float saw poor Lemuel attempting to escape his diminuitive tormentors, who had him bound by rope. Floats from Relay for Life, local GAA clubs, and other organisations were seriously impressive.

Our local Filipino community were also joyously represented by more than 30 participants, who defied the overcast day with their dancing, and brightly-coloured attire.

One of the more impressive floats – the giant Bui Bolg dragon –made an impressive finishing act, but perhaps could have been deployed earlier. He seemed to struggle to keep up along High Street, perhaps due to  sheer size.

The fun is continuing this evening now as part of the day’s events, as well as Tradfest. Some of the country’s most acclaimed musicians and artists are set to play in Kilkenny this weekend.

See our Gig Guide for more.