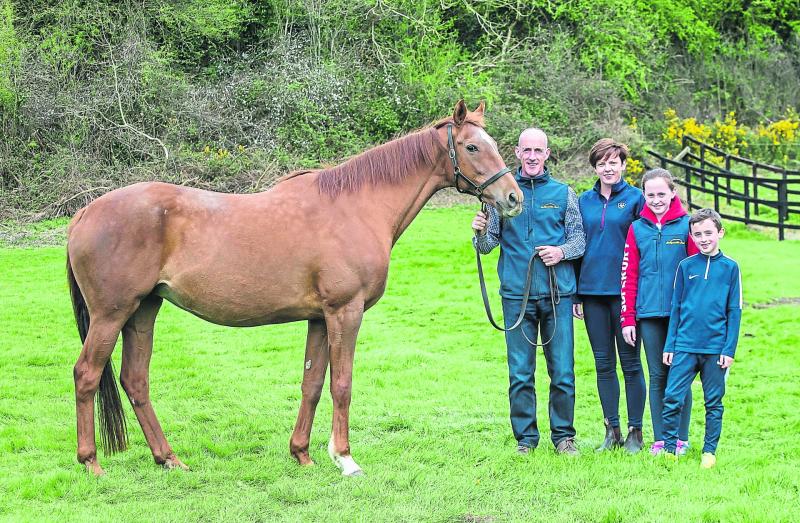 John, Patricia, Aisling (11) and Ronan Dwan (8) with Nonnetia, the dam of Grand National 'One For Arthur' pictures in Bennettsbridge as they celebrate a historic win for one of their mare's progeny

As 'One For Arthur' came over the last fence in front at the end of the Aintree Grand National on Saturday, a Kilkenny family were shouting him on more than any other.

John Dwan, the man who bred the superstar of National Hunt racing, was in the sitting room of his home in Bennettsbridge along with his wife Patricia and children, Aisling and Ronan, urging him on as the winning post came sight

Not since the has a horse won the Grand National, that was the legendary, Red Rum bred by Martin McEnery, Kells. At eight years of age, One For Arthur stands every chance of winning next year.

Meanwhile, in the field behind Dwan's house, One for Arthur's mother, was eating grass unaware of the her progeny had caused.

She is in foal to the top sire in these islands, Kayf Tara, a son of the legendary, Sadler's Wells. Going on the success of One For Arthur and two other horses by the same parents ( and sire, Milan) as the Grand National winning horse, the are in for a very lucrative .

However, the success comes after 30 years of breeding and investing at Ballyreddin Stud.

One For Arthur's mother is 14 years of age and has five or six more years breeding in her. John Dwan displayed incredible shrewdness in buying the mare as a in 1996 at the Goff's sale inParis. It has paid dividends but for it is about the horses - he eats, sleeps and thinks equine.

Fellow Bennettsbridge man and Mayor of Kilkenny city, Cllr Patrick O'Neill said the win underpinned the value of the horse industry to Kilkenny and the region.

"This highlights the incredible work done by people like John and it is a testament to his genius and devotion that the city and county celebrating this success," the Ballyreddin native said.