'Geocachers' from across the globe wowed by well-known local spot 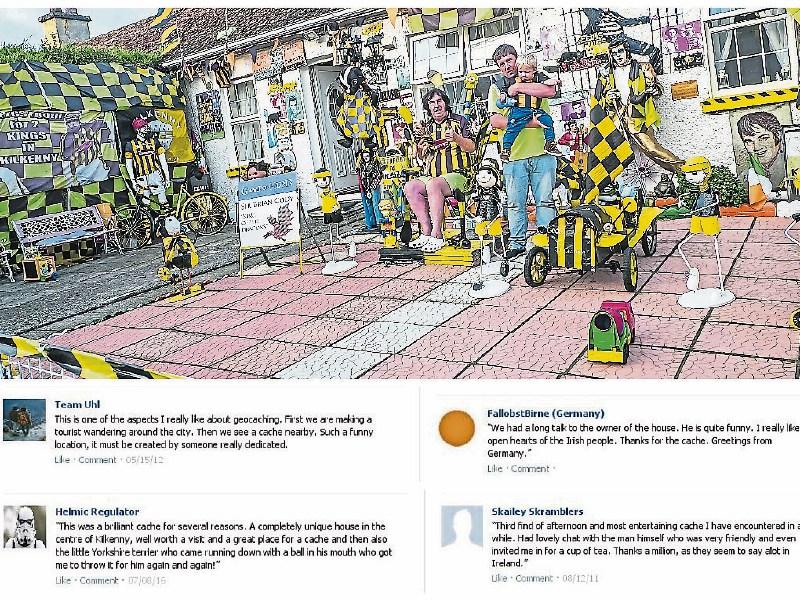 Pictured: Myles house before a previous All-Ireland, along with some of comments from geocachers.

With over 650,000 visitors each year, the home of Elvis Presley in Memphis, Tennessee is the second-most visited home in America (after the White House) and one of its largest tourist attractions.

But it's the home of Kilkenny's Myles Kavanagh – the Marble City's own 'Graceland', that has been drawing a few more pilgrims than usual in recent months. And 'Elvis', and his famous Irish hospitality, have been getting some rave reviews.

'Geocaching' is an outdoor recreational activity in which people use GPS along with other navigational skills to hide and locate containers called 'caches' at different coordinates all over the world. It just so happens that one of these geocaches is at Kilkenny's Graceland, near the Butts Green.

And so, Myle's 'Graceland' has logged hundreds of visits from people travelling from near and far to see the house, and in many cases meet its inhabitants. Visitors from all over the world have logged in on the cache and left reviews, the vast majority of which are overwhelmingly positive.

Myles has, of course, been more than accommodating to all his drop-in visitors, chatting with them, inviting them in for tea, even serenading them and sending them away with parting gifts. His friendliness and hospitality have become legendary in the geocaching world.

There was the German couple who were treated to a rendition of 'Muss I Denn', leaving them blown away, before he chatted to them about the next leg of their trip. For at least two lucky couples, ‘Elvis’ even offered to perform at their weddings!

“A great talk with Elvis,” wrote one Spanish geocacher

“He gave us a flag and lent us his glasses for a photo!”

Another guest expressed surprise at meeting 'The King' in Ireland, and was delighted to take a selfie.

For the few dozen who called when no one was home, there was a clear sense of disappointment that the 'King' was not in the building. Others, however, were just in time...

“Had arrived at the house and started looking for no more than five seconds when a car pulled up. Out jumped Elvis,” writes one geocacher.

Another earnest traveller was just in time to catch the man himself before he left to go about his day.

“What a guy Elvis is. He would of [sic] talked all day long if it hadn't been for his beloved calling him in. He was off to Belfast today as apparently he hasn't enough Elvis stuff and Belfast is the place to get it.”

Many people simply cited the visit here as one of the reasons they got into geocaching – doing,seeing, meeting someone or something a little different – a nice memory to have.

“This is a cache to cherish. I smile when I think of our visit. Definitely a favourite.” writes another.

Some geocachers simply say that this is one of their most enjoyable caches ever, and that Myles and his wife Mary were so kind and friendly.

“What a very dedicated garden to the King, it's one of those caches that u hear about in caching circles, but this one is seeing is believing. Fair play to the owner,” writes one European visitor.

Anyone who has worked in tourism knows that it can be exactly these little personal stories and moments to cherish that make somewhere worth visiting and telling your friends about. It's testimonies like these that are sure to keep people coming to 'Graceland' and back to Kilkenny. Well done all.