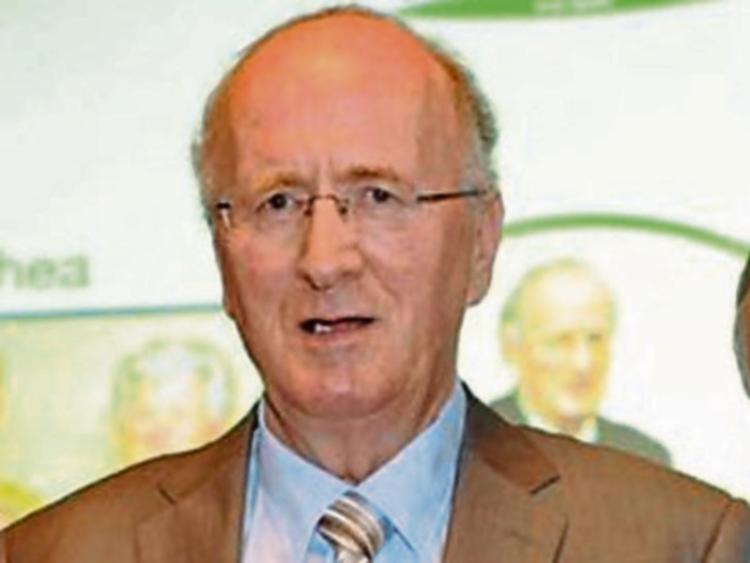 It is with deep regret that we record the death of Jim O’Shea, The Orchard, Rockenham, Ferrybank, Waterford. Aged 69, Mr O’Shea passed away at Waterford University Hospital on April 4th following a long illness bravely and courageously borne.

Following Prayers at Mr O’Shea’s residence, led by Canon James Crotty, PP, Ferrybank, the deceased’s remains were removed to the Church of the Sacred Heart, Ferrybank where they were received by Fr Raymond Dempsey, CC. A Guard of Honour was mounted by members of Ferrybank AFC and by pupils from St Mary’s Boys School.

Requiem Mass was celebrated the following day, Thursday April 6th, by Canon Crotty, assisted by Fr Dempsey. Also in attendance was Fr Pascal Moore, PP Piltown and Templeorum, a friend of the deceased. Prayers of the Faithful were recited by Sarah Flynn, Grace King, Olivia Flynn, Claire Butler, Sinead Perry and Jack O’Shea, nieces and nephew of the deceased. The Gifts to the Altar, a football and a Waterford Crystal bowl, were carried by Edel Leahy and Ethan Flynn, niece and grand-nephew while Gifts at the Offertory were carried by Mr O’Shea’s two daughters-in-law, Yvonne and Natasha. The Readings were delivered by Gerard O’Shea and Ian O’Leary, the deceased’s brother and nephew. The soloist was Rosemary Heffernan and the accompanist was Rose Prendergast. At the invitation of Canon Crotty, Mr O’Shea’s sons, Alan and John, briefly addressed the congregation at the conclusion of Mass. Interment took place in the adjoining St Killian’s Cemetery immediately afterwards where Canon Crotty, assisted by Fr Dempsey, officiated at the graveside. Present with family, friends and neighbours at the removal and Requiem Mass were representatives of the city’s sporting, business, political and media sectors. Former colleagues from Waterford Crystal were there in force. Also present were executive representatives of the FAI, Ian Mallon and Karl Heffernan, and former Dublin, Manchester United and Republic of Ireland star, Kevin Moran, longtime agent and advisor to Jim’s son, John.

Son of the late Eileen and Frank O’Shea and stepfather, the late Jack Cantwell, Jim was born in Kilkenny City but came to live in Ferrybank when he was 11 years old. Educated at Mount Sion and the Central Technical Institute, he worked for a short period at ACEC before joining the staff at Waterford Crystal where he remained for 38 years until he accepted early retirement. A highly skilled craftsman, Jim was a Master Cutter attached to the K4 Section and, on occasions, he travelled to the United States and other places outside of Waterford to sign and engrave handcrafted crystal for purchasers.

Jim played GAA in his youth and won an Eastern Minor Hurling Championship with Ferrybank. However, soccer was his first love and he was a regular at Kilcohan Park from childhood and, later, the RSC. He was a stalwart player and officer of Ferrybank AFC all his life. He served as Chairman of the Club and also as Chairman of the Schoolboy Section. He contributed to the community as a member of the Ferrybank Parish Council and was also a member of the Board of Management of St Mary’s Boys School. He was also heavily involved with the parish Youth Club and Pitch and Putt Club.

However, family was paramount to Jim and he and Mary were devoted to their sons, Alan and John, and, later, their grandchildren. They were so proud when Alan became a member of An Garda Siochana and John a professional footballer at Manchester United, Sunderland and the Republic of Ireland. When he had his health, Jim regularly travelled to England and abroad to support John as a Premiership and international player.

Jim was a big man but he was also a gentle man and a genuine gentleman. He never drank but was a very sociable person and gained 3many, many good friends along life’s way. He was also a good friend to others when the need arose. Following his retirement, Jim and his close friends rarely let a day pass without a stroll around the city where they were always ready for a chat and a joke. Nothing happened that they didn’t know about!

He was possessed of a great sense of humour (sometimes wicked!) and loved music in which he had an eclectic taste that ran from the popular operatic classics to the Wolfe Tones. Throughout his long illness, he kept his interests, his dignity and his humour. When he was unable to get out and about, his friends came to him and the chat and banter continued in The Orchard.

The esteem in which Jim was held was reflected in the large attendance at both his removal and Requiem Mass. He will be missed greatly by all who had the privilege to know him. Ar dheis Dé go raibh a anam.