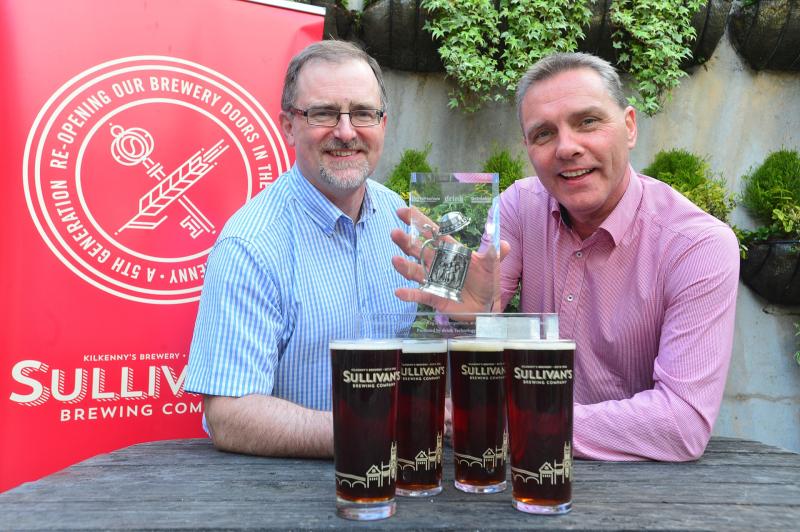 Ian Hamilton and Alan Quane with the Golden Keg award

Kilkenny's Sullivan's Ale has, proudly lifted the Champion Keg Ale trophy for its Maltings Red Ale at a ceremony in London’s Guildhall in the Burton-on-Trent based International Brewing Awards 2017, which is hosted every two years.

The longest running competition of its kind (known as ‘the Oscars of the brewing industry’), the International Brewing Awards date from 1886.
It is rigorously judged by a panel of experienced brewing professionals across three days and focused upon searching out true global excellence. Trophies were awarded to nine brewers and one cider maker from three continents, with Sullivan’s the only Irish win.
The master brewer at Sullivan’s is Ian Hamilton, the creator of Maltings Red Ale, a refreshingly balanced, ruby-tinted classic Irish Ale with a unique depth of malt flavour imparting distinctive biscuit and caramel notes.
As good as it gets
Commenting on the win, Ian Hamilton said: “I spent time early in my brewing career in Burton-on-Trent, so to have my beer judged there by some of the best brewers in the world and be awarded a trophy, is about as good as it gets – especially as it comes only a year after Sullivan’s started brewing.”
Traditionally brewed, with only Kilkenny-grown ale malt, Maltings Red Ale includes three special darker malts and three varieties of hop. Fermented and matured with cask ale yeast, coupled with no-rush brewing, produces smooth balanced classic ale.
A true artisan, Hamilton says: “The beer we craft is inspired by traditional Kilkenny recipes and brewed the way the family has always brewed – the way real Irish beer should be brewed – by a dedicated Brewer, in small batches, with enormous heart and the finest locally sourced ingredients.”
Chair of judging Bill Taylor: “We judged more than 1,100 beers and ciders in Burton-upon-Trent in March this year. It’s a tremendous achievement to come through that process to win firstly a medal and then one of just 10 Championship trophies, so everyone on the podium today should feel very proud. We are also proud of the emphasis we place on products’ commercial worth; all the medal and trophy winners are beers or ciders that, once tasted, judges would recommend as world class examples of their style.”
Master brewer
Ian Hamilton is one of just a handful of accredited master brewers currently at work in the Irish Craft Beer sector.
His experience over 30 years spans several continents where he has brewed all styles of quality beer imaginable.
From the heart of Africa to some of the biggest breweries in the western world, Ian Hamilton’s knowledge and skill comes with accreditation gained only from years of hard work through the Institute of Brewing & Distilling, London.