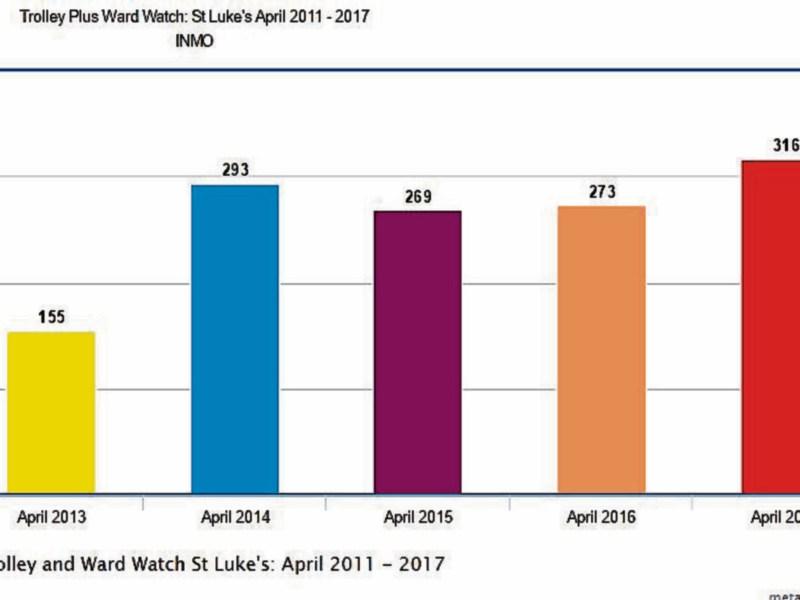 There were 1,472 patients on trolleys awaiting an in-patient bed at the Kilkenny hospital for the four-month period January to April, figures from the INMO show. It’s an increase of more than 15% on last year’s figure for those four months, and an increase of 170% since 2013 when the figure was 546.

Since records began in 2011, relatively clear trends have emerged. January generally shows a spike in the figures everywhere, in part due to increased cases of seasonal illnesses such as flu. However, last month was also the worst April yet for trolleys at St Luke’s. This bucks the national trend, where figures were generally down.

A total of 319 people waited for a bed in St Luke’s Hospital in April — a 17% increase on the same month last year, despite an overall national decrease of 12%.

The HSE has not offered a reason for the unusually high figures at this time of year.

In the week approaching the Bank Holiday weekend at the end of April, figures climbed steadily. By Friday, April 28, there were 28 people waiting for a bed on trolleys.

Liam Doran of the INMO has said the latest statistics confirm that health services continue to be too small to adequately, and safely, meet the demands being placed upon the system.

“The shortage of beds in acute hospitals and step down facilities remains a real problem in this ongoing crisis,” he said.