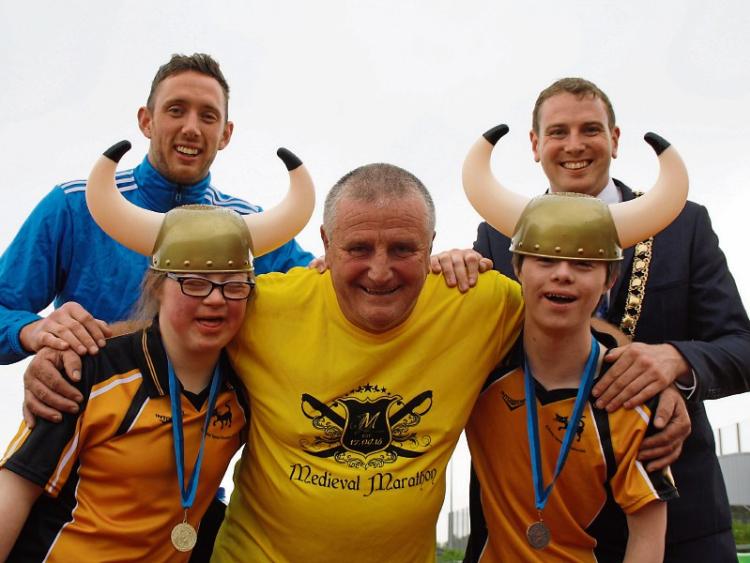 Special Olympics Leinster have been announced as the official charity partner for two major running events in Kilkenny this year.

Participants in both the Tullaroan Marathon on June 3 and the Medieval Marathon on September 16 will help to transform lives through sport for people with intellectual disabilities in the Leinster region.

One euro from each entry will be donated to Special Olympics while runners are also encouraged to pick up a sponsorship card. Regional Fundraising Coordinator for Special Olympics Leinster Louise Duffy said any funds raised make a huge difference.

“This is a massive boost for athletes in Leinster and for ourselves as an organisation,” she said. “We recently had 141 athletes from across Leinster competing in Kilkenny at the Regional Athletics Advancement Event. It was great for people to come down to the Watershed and see exactly what role Special Olympics plays in athletes’ lives,” she added.

“We are thrilled to do our bit for Special Olympics in Leinster,” said Guthrie. “Attending the Regional Event was a real eye-opener for myself personally. The enthusiasm for running and the commitment from the athletes and the organisers was inspiring.”

One hundred and sixty six volunteers gave their time across two days of competition featuring 235 races and events. There are 1,477 Special Olympics athletes in Leinster alone, many of whom are dreaming of selection for Ireland Games in 2018.

“Everyone who signs up for the Tullaroan and Medieval events can feel good that they are doing their bit for a brilliant organisation,” Guthrie continued. “I hope lots of people take up sponsorship cards.”

The fourth annual Tullaroan Marathon is a family friendly event with five distances to choose from and a team competition. The 5k, 10k, 21k, 42k and 63k courses take in some of Kilkenny’s best countryside across the rolling Tullaroan Hills and entries are limited to ensure a rewarding experience for all runners.

The Medieval Marathon in September boasts the same warm welcome as the Tullaroan Marathon as well as one of the most impressive backdrops for any event in the country. The hospitality also extends to an after-party in Sullivan’s Brewery Taproom just a five minute walk from the finish line on the Parade.

On September, the 16, participants will set off from the grounds of Kilkenny Castle at 1pm.

All finishers will be rewarded with a bespoke medal and technical t-shirt to celebrate the battle victory!